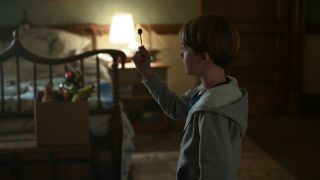 Netflix just dropped the first trailer for Locke & Key, a horror series based off the comic books of the same name that were written by Joe Hill, the son of horror (aka Stephen King). It'll hit the streaming service on February 7, bringing with it the tale of three siblings who move to their ancestral home after their father dies and unearth its powers. Check out the trailer below.

"My kids need a home," a disembodied voice that is clearly their mother says early on the trailer, before Jake from Animorphs replies with, "Does it have to be this home?" Any other self-preserving family would run, but this is a horror show, and they're staying put. The ancestral home, called Keyhouse, is spooky, and things get even spookier when they discover magical keys that grant them special powers and abilities. "These aren't keys, they're weapons," a voice tells us. But the kids clearly believe the keys are part of their legacy and connect them to their father in a special manner. Very much not good.

After the success of The Haunting of Hill House, it's great to see Netflix put forth another original horror series, even if this one has been in the works for quite some time. As GamesRadar+ reported back in 2011 (virtually centuries ago), Locke & Key was rejected by Fox and other channels even after it produced a pilot - after that it seemed dead in the water. Hulu filmed a pilot a couple of years ago, but that failed as well. The Netflix version has one of the same actors as the Hulu pilot (Jackson Robert Scott from It: Chapter Two) but otherwise the cast is entirely different. Television is weird, huh?

The Locke & Key comic book series is great, with Lovecraftian themes and a beautifully written family story. It's exciting to see the series finally play out on screen. Watch it on Netflix starting February 7.

If you're in the mood to be scared, check out our 20 best horror games of all time.