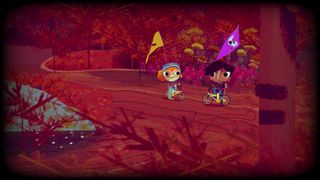 We all need a little lightness from life, a gap in which to revel in the simpler side of things; much like we did as kids. Even busy adults need to remember the joy of innocent play, where a stick could be a magic wand or a hulking broadsword. Didn't we all want to make friends with local wildlife? Build dens in the woods? Bomb around on our bikes, preparing for plywood jumps, skinning our knees? Enter Knights and Bikes, whose style is tinged with that nostalgia. Where the animation and art remind us of Saturday mornings, cross-legged in front of the TV, waiting for the knock on the door and the voice of a best friend.

Those heady days of stinging nettles and bruises are distant to me now. However, within just ten minutes with Knights and Bikes, I was transported. The game follows two new friends, Demelza, a wiry tom-boy whose red hair is as wild as her spirit and newcomer to the town, Nessa who is reluctant and secretive. The pair throw out charm by the bucketload. They're the ideal double act for a small-town adventure – one which is distinctly British – from the Mini Golf course to the accented dialogue and even the grotty weather. It's not much of a vacation, but it's a great escape.

The playful spirit of the pair mirrors the creators, Moo Yu and Rex Crowle, both ex-Media Molecule staff used to games made with whimsy and adventurous gusto. The idea for Knights and Bikes was born out of a casual conversation between the two, a shared passion for adventure stories and films gave way to the isle of Penfurzy. Many have compared the game to The Goonies due to the similar story – Demelza's father, in dire straits, has to sell the family caravan park and Demelza is sure a local treasure could save them from ruin.

The game does share a lot with those classic movies, but also shares a lot with modern cartoons; it's a splicing of Goonies, Adventure Time, and BMX Bandits. There's a sense that within this childhood life, the only importance is the current goal, which usually involves some form of mischief. Nessa is a bit of a bad influence, urging Demelza on, but also guiding the player. Though it's possible to switch control between the pair when playing on your own – sharing the control in co-op is much more appealing, especially when it comes to the mini games.

As a parent, I had to call my kids into the room and put the game into their hands as well. While I appreciated Knights and Bikes for what it was doing and the way it looked, their opinion would focus on other aspects. To them, Penfurzy became what it is to Demelza and Nessa, a playground. In their hands, they darted around on the bikes looking for places to explore and enemies to bash. The simple controls allowed them to pick up and play with ease. Players were clamouring for a Switch release of the game and it fits the system wonderfully, giving the feel of a Nintendo title without the guiding hands of the Japanese giant.

And it does feel like a Nintendo game. With minimal RPG elements – though you can upgrade many facets – and a focus on story and fun, in another age Demelza and Nessa could have been console mascots. The guidance of publisher Double Fine is clear, Knights and Bikes shares a lot of themes and style with Costume Quest, another title which has expanded beyond the realm of games.

Foam Sword Games have created, perhaps accidentally, a lovely deep world full of possibility. By setting the game on a skewed version of the UK, where anything is possible, they've developed the potential for so much more. Which we see from the first book from publishers 'Knights Of' authored by Gabrielle Kent – not only does the book flesh out the characters and Penfurzy, it offers younger gamers a chance to explore further, encouraging future readers. The game certainly tells one story, but the book branches off to show another side. And with a TV show in the early planning stages, it shows that there is a lot more to explore beyond the game itself.

Even some moments in development were akin to exploration, Rex and Moo would often implement their ideas into the game at whim, encouraging the other to playtest new concepts. First ideas found the game host to a small group of kids, much like The Goonies, with each bringing a style and ability to play. This idea was quickly dashed as the creators believed that players wouldn't relate to any of the cast in depth, which is something we can so easily do with the two characters we have. Demelza's plight becomes so much more important to the player, the moments of close conversation between the pair are more heartfelt, they carry weight.

It's easy to be bogged down by life. It's something which affects us all, young and old. Knights and Bikes has the ability to eschew that heaviness with the ease of its design. It's not just the feel of the bikes or the play-fighting, this spark of pure joy comes from the visual design – part cartoon, part paper-cut collage of memories. It comes from the little choices, such as the toilet paper company called 'Ploppy' which chips a smile into even the most hardened of frowns. It's hard not to be impressed by the work that has gone into creating this lovely little game.

There's plenty of awesome upcoming Switch games for 2020, why not give the long list a read while you're waiting for Knights and Bikes to download.