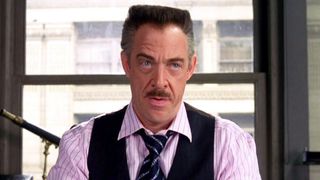 JK Simmons recently finishing filming on his latest project Justice League. Taking on the role of Commissioner Gordon in the DC Extended Universe, the Oscar-winner sounds like he's had a hoot so far, despite clocking in a lot of long days as Gotham's presiding lawman.

With his footage in the can, ET Online grilled him on who we can expect to see Simmons playing opposite. Might it be The Dark Knight? Ding ding ding! "Yeah, mostly with Ben [Affleck]," he begins. "In this first instalment of the Justice League, Commissioner Gordon is not a particularly sizeable part. We just kind of introduce him and see a little bit of his interactions with Batman - and with most of the Justice League."

Based on set reports we know that Gordon has at least one scene with the entire Justice League on a rooftop. It's not a huge surprise that outside of that he'll be sharing much of his screentime with Batfleck. Affleck's take on the caped crusader was my favorite part of Dawn of Justice, so the idea of seeing him onscreen with Simmons further bumps up my interest in Justice League. Possibly because I'm imagining Simmons as a stern, Whiplash-inspired Commissioner.