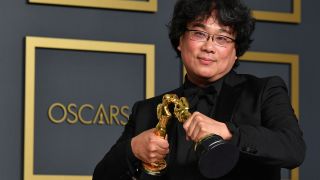 In case you missed it, Bong Joon-Ho won four Oscars at this year's awards. In total he got one for Best Director, Best Foreign Language Film, Best Original Screenplay and Best Picture win for Parasite, the first time a foreign film has taken that honor. (Check out the Oscars 2020 winners list for the full run down).

In doing so he beat out films like 1917, Joker and Once Upon a Time in Hollywood, and people such as Quentin Tarantino and Martin Scorsese. It was a big night for the Oscars, a big night for international cinema, but mainly a huge night for Joon-Ho who, in a very human display of 'holy shit, what now?', proceeded to giggle, smile and apologise for winning so much. It's infectious and heart warming so enjoy these reactions of someone just having the best night of their lives.

Still having a moment.

Which is mainly because he got a standing ovation, which can take a moment to settle in for the best of us.

In Joon-Ho's own words after the awards:

Here he is saying he's going 'drink until next morning', then getting lost trying to leave the stage but not caring in the slightest. Who would with four Oscars?

So many in fact, that he apologised to the engravers for giving them so many to do. Basically, well done Bong, you've earned it.

Bong Joon Ho wasn't the only winner last night, with Joaquin Phoenix also picking up the Best Actor award for Joker. Check out our interview with him below.