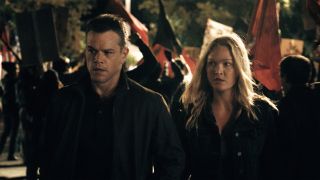 After a nine year absence, Matt Damon's Jason Bourne will return to cinema screens later this summer. While The Bourne Ultimatum seemingly wrapped up the character's arc, the fifth film in the series sees Damon's $100 million weapon trying to deal with his reclaimed memories. As this new behind-the-scenes featurette reveals, Bourne's favourite coping mechanism is "pounding other human beings into oblivion".

The two-minute featurette doesn't give away too much of the film's plot - we know Bourne is enlisted by the CIA, but we don't know why - but it offers some great snippets of action amidst some interviews with Damon and Paul Greengrass. It's that actor-director combo that has many people excited for this one, and all the footage we've seen so far looks very promising (that clip of Bourne knocking out a fighter with one punch will never get old).