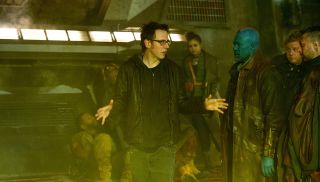 The rivalry between Marvel and DC is one of those things that's on-again, off-again depending on what's hot at the box office. Earlier this year we had Batman v Superman and Captain America: Civil War hitting screens in a space of six weeks. An exciting time to be a comic book fan, certainly, yet it stirred things up between Marvel and DC fans as one received glowing reviews and the other.... well, didn't. Then there's other incidents that only fan the flames (DC helmer David Ayer yelling "Fuck Marvel!" prior to a screening of Suicide Squad, for example.)

It's refreshing to hear from one party who's totally disinterested in the entire skirmish: Guardians of the Galaxy's James Gunn. “I just don’t find any room in my headspace for thinking my movies are superior or inferior to someone else’s,” he tells Variety. “I really just think about how can I make, for instance right now, how can I make Guardians Vol. 2 the greatest spectacle film of all time? That’s all I care about so that’s what I concentrate on.

Hearing his straightforward opinion definitely puts things into perspective. There are many readers who aren't beholden to one specific publisher - myself included. It's these groups who just dig good stories, well-drawn panels and great characters. Does it matter who publishes them?