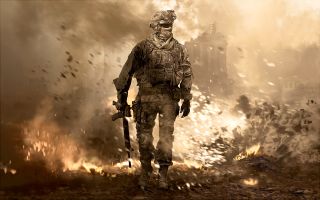 In what seems like a coordinated leak, former Infinity Ward creative strategist Robert "FourZeroTwo" Bowling tweeted a few hints regarding the rumored, upcoming Call of Duty: Modern Warfare game. Bowling hasn't been with Infinity Ward since 2012, but the developer may still have some connections to Activision and his former team.

Bowling's first tweet includes video referencing Operation Kingfish, an operation from Call of Duty: Modern Warfare 2 where Sandman, Frost, Captain Price and the rest of the US forces attack a base belonging to Vladimir Makarov, the main villain of the Modern Warfare series. The video features a photo of four soldiers including Ghost, Captain Price, Sandman, and Soap standing together with "10/8/13" written in the corner. Bowling's tweet reads: "I will let you down I will make you hurt //10.8.19//," possibly referencing a release date or announcement later this year.

In the second tweet Bowling clips a small segment of soldiers getting ready to burn the player character, Ghost, in Modern Warfare 2 with narration talking about how history is written with lies.

These tweets, among a few others that feature Bowling, seem to point to a new Call of Duty game, possibly Modern Warfare 4, getting announced at E3. The official E3 Twitter account has already confirmed that Infinity Ward would be talking about the next installment in the incredibly popular series during the trade show coliseum event. Activision has also confirmed that a "game changing" Call of Duty experience would be coming later this year on an earnings call earlier this month. We can only hope that it's the long awaited Modern Warfare 4.

Can't wait for E3 next month? Neither can we. Check out our breakdown of what you could see at the biggest trade show in the game industry.