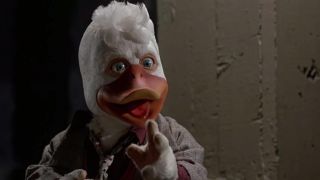 In the beginning,” the voiceover informs, “there was... Howard the Duck!” Never forget: 1986’s HTD (aka Howard: A New Breed of Hero) was the first feature-length Marvel adap released in cinemas. Actually, this film wasn’t released; it escaped. And from some dank corner of no less a production outfit than Lucasfilm Ltd.

Maybe HTD’s pedigree was partly the reason it received such a roasting (four Razzies were only the tip of the fatberg). Still, however you slice it, the movie’s a giant, noisy mess, at odds with its cult source material as much as it is the expectations of a mainstream audience.

And yet, I’d argue, the diminutive duck stands head and shoulders above many, many comic-book flicks. Its unique tone – or lack thereof – gives Howard’s fowl-out-of-water adventures a bizarre, erratic, unpredictable momentum. But I’ll take that over the sheer dreariness of the likes of Constantine, the Punisher movies (all three), Elektra, Daredevil, The Spirit, Jonah Hex, Catwoman, Blade: Trinity...

Even those camp anti-classics Superman IV: The Quest for Peace and Batman & Robin can’t hold a candle to Howard’s warped watchability. Both those films are sorry echoes of once- great series; it’s not particularly funny seeing Christopher Reeve trying to inject soul into a desperately cut-price spectacle.

On the other hand, there is something grimly amusing about the don’t-know-when-to-stop onslaught of duck puns in Howard’s opening scene (Breeders Of The Lost Stork, Mae Nest, ad nauseam).

Clearly, some aspects of HTD are indefensible: no one needs to see anthropomorphic duck boobs once, let alone twice. Yet there are also elements that transcend so-bad-it’s-good, emerging as actually decent. Thomas Dolby’s songs are stubbornly catchy. The reveal of the final stop-motion monster is worth waiting for. And Lea Thompson – the film’s true hero – somehow sells the idea of romance between a woman and a guy (actually several guys) in a shonky duck costume.

That notorious outfit now exerts a strange analogue charm. Time has been kind to HTD. There’s even a new Blu-ray out, studded with extras befitting Marvel cinema’s first born. Evidently, it’s not just me who’s quackers. Or is it?