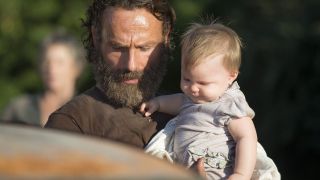 It’s nearly time. Rick’s war with Negan and the Saviors might feel like it’s been going on since the dinosaurs roamed the Earth but – fret not – the conflict is coming to an end. That is, according to The Walking Dead season 8’s synopsis and new poster. They not only tease something called ‘The Last Stand’ (very ominous) but also a definitive face-off between Rick and everyone’s favourite baseball bat-swinging psycho.

Let’s take a peek at the poster. I don’t want to overstate it, but it’s a biggun.

It’s all coming down to this. #TWD returns 2/25. The Walking Dead

It’s just screaming final showdown, isn’t it? The Final Stand in big, blocky letters; Rick and Negan staring each other down and that oh-so-juicy caption: ‘It’s all coming down to this’. After 33 episodes, it looks like The Walking Dead’s biggest war might finally be heading to its conclusion.

Before then, though, there’s a helluva lot of tangled webs and loose threads to tie up. The synopsis makes that abundantly clear – mostly because it’s the length of a mini-essay. You can check it out in full on the AMC site. Here are the best bits:

"At the very centre — Rick, having been distracted by the conflict, has just returned home to learn that Carl, who heroically shepherded the Alexandrians to safety during Negan's attack, has been bitten by a walker. Once his sole motivation in this otherwise stark existence, Rick is forced to deal with this reality.”

Rick and Carl’s relationship is definitely going to be the crux of the season. Expect flashbacks, maybe a cutesy montage or two, and Rick’s crying face. Expect Negan to take the brunt of his rage.

Maggie may (or may not) turn evil

"But Rick isn't the only person who's living in peril. Aaron and Enid are in a dire situation at Oceanside — unclear if they're in friendly territory, or if they've just made new enemies. Father Gabriel will do his part in attempting to smuggle Dr. Carson safely back to the Hilltop and a pregnant Maggie is wrestling with the many moral gray areas that come with leadership during war. In a standoff with the Saviors, she must decide how to proceed with the dozens of POW lives she's currently in control of, as well as new complications that come with being a leader.”

We’re still not done! But, hey, at least we’ll check in with Oceanside again – and Maggie’s storyline is probably going to be the most interesting leading into the final 8 episodes (Carl’s imminent death aside).

"In addition to the war, Negan continues to deal with struggles within his ranks as workers, traitors, and others' thirst for power cause conflict at the Sanctuary. Having gifted the Saviors a major victory, Eugene's loyalty is repeatedly tested as new obstacles present themselves.

…and breathe. Eugene’s split loyalties is probably the main takeaway here. The gifted goofball has been Team Negan for some time, but he could be itching to come home if he thinks the tide is turning away from Negan. He’s a smart cookie, that one.

There’s a lot going on in the second half of The Walking Dead season 8. Not least being AMC isn't quite clear what a synopsis is (I kid, I kid). An end is on the horizon… but will either Negan or Rick be there to see it?