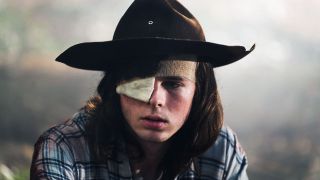 And, we’re back! The Walking Dead season 8 kicked off again with its mid-season premiere. A certain someone bit the bullet (emphasis on bit), there were a few surprising character developments, and we finally got an answer to what the hell was up with those Old Man Rick visions. All in all, then, plenty for the internet to get their teeth stuck into. If you haven’t seen the latest episode yet, beware, spoilers to follow...

It’s finally time to say goodbye to Carl. From the opening montage to the quiet pop of a bullet as Rick and Michonne stood sobbing outside, the episode handled the death of Rick’s eldest extremely well – even if some thought it dragged on for a little too long.

Every person that ever got bit turned in 5 minutes.Carl gets bit & milks it for an hour & 15 minutes and counting.Drama queen til the end...#TheWalkingDead#TWD26 February 2018

What song was that?

If you were humming along to the song at the beginning of the episode, I don’t blame you – it’s a good’un. Bright Eyes’ At the Bottom of Everything (which, as luck would have it, tells the story of a man coming to terms with his life as he faces imminent death) is a perfectly bleak choice for a show that only uses non-diegetic music when it really has to. Everyone seems to agree with the choice too.

If #TheWalkingDead just became an hour of people doing mundane, daily tasks set to Bright Eyes songs, it would be my new favorite show26 February 2018

No guts, no glory

Ah, Morgan. Our favourite pacifist-turned-gut-ripper was at it again this week. His final kill may have been stolen from him by one of The Kingdom’s youngest citizens (are we seeing another Carl in the making?), but it’s clear that Morgan hasn’t been right for some time. In all honestly, though, I’d happily watch Morgan turn into a horror movie slasher more often. Those scenes give me chills.

Morgan pulling out the guts of that guy... #TheWalkingDead pic.twitter.com/X7JzEQjHcA26 February 2018

Negan: I have the most gruesome kills ever on #TheWalkingDead Morgan: Hold my f-cking beer26 February 2018

It wasn’t a flashforward. It wasn’t a hallucination. It was all Carl’s doing. It seemed to stem from his hopes for a new world once he’s gone. It all seems very optimistic – heck, Negan is there to embrace Judith which opens up a whole ‘nother can of worms – but the message that Carl’s optimism never died will surely stay with Rick (and us) for at least the next 40 seasons.

old man rick still looks like he's 0.3 seconds away from telling me why his generation is the greatest pic.twitter.com/nlhftKADgb26 February 2018

Oh, so Old Man Rick's future is actually Carl's dream...that's so much better and by better, I MEAN HEARTBREAKING! All he wants is for everyone to be okay! He deserved to see them all be okay, damn it! FUCK YOU GUYS! #TWD26 February 2018

@WalkingDead_AMC WHY WAS OLD MAN NEGAN IN THE SAME VISION AS OLD MAN RICK?!26 February 2018

Not everyone was happy with the mid-season premiere. Pacing seems to be the main issue but, having said that, it definitely stuck the landing. We’ve got the main talking point from the first half of the season out of the way quickly without lingering on it; it’ll be fascinating to see where the show goes from here.

I just watched the new episode of the walking dead and I’m an emotional wreck so I’m gonna go back to sleep! goodnight I love Sebastian Olzanski with my whole heart.26 February 2018

That being said. Amazing performances on tonight's #TheWalkingDead ... brilliant even. But Jesus guys. The writing has gotten lazy AF.26 February 2018

@AMC_TV please fire your writers. Stretching this death over an hour and a half was pathetic. The pacing of this show is terrible. You need better editors and to take lessons from #got @chandlerriggs deserved better so over this show #TheWalkingDead26 February 2018

It's time to get over Carl, here's still more to come: 5 questions posed by the Walking Dead season 8 mid-season trailer should get you out of your stupor.