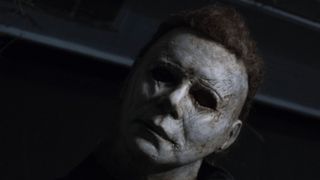 The Halloween quasi-sequel was one of the premiere hallmark horror flicks of the last year. The movie helped reset the confusing movie universe the franchise had built and was a refreshing take on a decades old villain, ditching the baggage in favor of a clear cut story about pure evil.

“[Keeping track of the continuity] is very confusing,” writer Danny McBride laughed in an interview with Slashfilm. “It’s just a convoluted way to make everyone have to watch all of them and figure it out.”

Halloween 2018 ended on a somewhat ambiguous note, leaving audiences unsure if Myers, the infamous knife wielding killer, was actually dead. Turns out certainly is not dead, as writer and Tropic Thunder basket case McBride and director David Gordon Green are working on two sequels: Halloween Kills and Halloween Ends. But, like many huge horror franchises before Halloween, McBride doesn't think Halloween will ever come to an end.

“I think no way and I wouldn’t want it [to end],” McBride said. “I feel like Michael Myers is such an iconic horror character, there’s a simplicity to why he’s scary that I think it will always be relevant for generations to come. I think we’re lucky enough to have a shot at it right now. I’m sure 10 years from now there’ll be another group of knuckleheads that think they have the answer to what they should do with Michael Myers next.”

McBride and Green have always had a plan for three movies, so that ambiguous ending in the first film shouldn't have led too many viewers astray. “When we first were signed up for it, we were going to originally try to do three movies back-to-back,” McBride said. “Ultimately, we were kind of all like let’s make sure we can do this one good. Then when we connected with people, we all decided let’s try to continue what we were going to do.”

Find out what's coming before Blade, Captain Marvel 2, and Black Panther 2 in the MCU with our essential Marvel Phase 4 round-up.