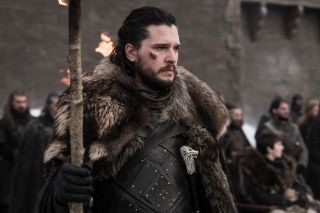 Game of Thrones season 8 upset a lot of people. Many fans of HBO's darling moneymaker, a show that helped push TV to greater heights of storytelling and production value, were left disappointed by the final batch of six episodes.

Now that the show is over and fan reactions have flooded Twitter, Youtube, Reddit, and every other corner of the internet, some readers are worried that the response might affect the end of The Song of Ice and Fire saga. During an interview with EW, author George R.R. Martin put those worries to ease.

“The internet affects all this to a degree it was never affected before,” Martin said. “Like Jon Snow’s parentage. There were early hints about [who Snow’s parents were] in the books, but only one reader in 100 put it together. And before the internet that was fine — for 99 readers out of 100 when Jon Snow’s parentage gets revealed it would be, ‘Oh, that’s a great twist!’ But in the age of the internet, even if only one person in 100 figures it out then that one person posts it online and the other 99 people read it and go, ‘Oh, that makes sense.’

"Suddenly the twist you’re building towards is out there. And there is a temptation to then change it [in the upcoming books] — ‘Oh my god, it’s screwed up, I have to come up with something different.’ But that’s wrong. Because you’ve been planning for a certain ending and if you suddenly change direction just because somebody figured it out, or because they don’t like it, then it screws up the whole structure. So no, I don’t read the fan sites. I want to write the book I’ve always intended to write all along. And when it comes out they can like it or they can not like it.”

Martin has spoken about this before, saying that he wouldn't change a storyline after fans figured it out. However, the show's success has only made it more difficult for Martin to finish the story he intended to write.

“I felt a tremendous amount of pressure for years now,” Martin says. “The most pressure I felt was a few years ago when I was desperately trying to stay ahead of the show. There was a point when the show was coming out in April and my editors said if I could finish the book by December they’d rush it out. And the pressure I felt that fall was the greatest pressure I’ve ever felt and then at a certain point it became apparent that I'm not going to finish it by then. I don’t only want to finish it, I want to make it as good as I possibly can. Since then there’s been pressure but not like there was at that point. There’s no longer a race. The show is over. I’m writing the book. It will be done when it’s done.”

We don't know when we're going to get to read The Winds of Winter and A Dream of Spring, the final two books in A Song of Ice and Fire, but Martin is still working on them.