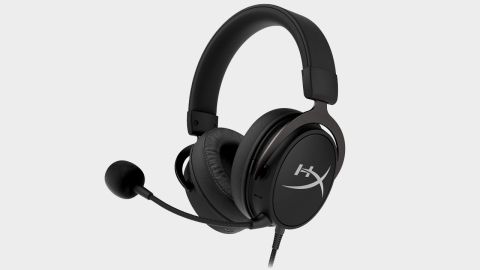 One of the best headsets we've tested, whatever system, machine or device you plug it into, you'll get quality sound and a great gaming experience.

The HyperX Cloud MIX is a gaming headset first and foremost, but also doubles up as an everyday set of cans, offering Bluetooth connection for media and phone calls. Versatility is often very attractive in gaming peripherals but this headset comes with a hefty $200 / £200 pricetag. Does it do enough to justify that high price of admittance? And where does it rank among the best PS4 headsets and best Xbox One headsets? Well, let’s break it down.

The MIX is a symphony in black. An aluminium frame (with cushioning) connects the two memory foam, leatherette-covered earcups which are pleasantly soft and comfortable. Inside these are the 40mm drivers that blast out the hi-res audio. It’s a well-built and sturdy headset with a headband that sticks tightly to whatever size is needed. The fit of the headset is secure and, just by design, exterior noise is cancelled out by the headset’s firm grip on your head. On the earcups, the controls are about right both in terms of positioning and number. You get a volume button, a power button and a multi-function button - the latter two mainly used when the MIX is in Bluetooth mode. There’s a small control box with a mic on/off switch and a volume roller half way down the primary cable. I say primary cable, as it is an audio jack connection for use when wired (straight into your console’s controller or audio port), but also comes with a cable splitter and extension for those using a different audio setup. Microphones are done two ways: a detachable boom mic for gaming; and a built-in one for Bluetooth mode.

2016’s DOOM is a tough run around for a headset, but the MIX does not disappoint. From gun sounds, to machinery and mechanics of the mars installation, from Hayden’s low and raspy, yet dulcet, tones, to in-game audio and environment sound details, everything is pitched well and balanced perfectly. Not an irksome spike in tone or lapse in clarity to mention. The Mick Gordon soundtrack is equally smashing, and the weapon noises are some of the most moreish I’ve experienced. To test the headset with a different kind of audio range, I boot up Assassin’s Creed Odyssey. The MIX again does not baulk at the challenge. From the flapping of sails, to the distant chatter of townsfolk, right to the busy hand-to-hand combat noise of baddy on spear and sword, the HyperX presents a very balanced and clear audio experience. Some of the voices don’t come through piercingly clear above other noises but this is a small criticism.

Jumping into Apex Legends, the surround sound is great for identifying audio cues and clues from teammates and enemies. Using it as a constant communicating headset with a human friend in Ghost Recon Wildlands is equally a joy. Even cars’ passing radios were clear and distinct while, again, the surround sound came through exquisitely for identifying the location of pesky enemies who I didn’t have the chance to properly tag. My pal’s voice was lovely and clear in the game and he confirmed I was too. The only slight shortcoming of the Cloud MIX is highlighted in Wildlands (and similar games, I’d wager) as when things really kick off and I still had to communicate with my buddy, everything comes through the headset at the same. This is just too much. A benefit here would be a balancer for in-game and chat audio which could address this - not an outrageous suggestion for a headset of this price.

Using the MIX as a normal headset, both in Bluetooth mode and plugged in for media, is clearly a big selling point. I put this versatility to the test by first turning to some film and TV. The John Wick films were great fun and everything from the dialogue to the crash bang action scenes came through with a consistent intensely. Turning to some of the recent Game of Thrones episodes, all sounds are clear but perhaps the dialogue isn’t as penetrating in busier scenes. Lastly, after listening to lots of different music on commutes and at home, it is evident that the MIX ticks that box too.

If you’re looking to spend big on a premium gaming headset, then the Cloud MIX is definitely one for you. If you’re looking to get a gaming-focussed headset that can also be your go-to set of cans for other media, then the MIX is also a strong contender. The whole package of audio quality, comfort and versatility means that the Cloud MIX does go a long way to justify that high price.

One of the best headsets we've tested, whatever system, machine or device you plug it into, you'll get quality sound and a great gaming experience.