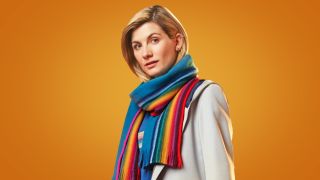 Want to know how to watch Doctor Who online? We've done the research and can help you find the best options to enjoy the ongoing Doctor Who season 12 wherever you are in the world.

We're at the end of season 12 now, with the final episode airing this weekend around the world. But we've got you covered on how to catch up on previous episodes too. So let's get down to it. Look below for all the latest options on how to watch Doctor Who online or on broadcast TV in the UK, USA and beyond.

The final episode of Doctor Who Season 12 will be broadcast on BBC One at 7:00pm on Sunday, March 1st.

You don't have to watch it on broadcast TV though, as live streaming via the BBC iPlayer is another option used by millions of viewers. iPlayer is available on smart TVs, mobile, tablet, iPad, laptop, streaming sticks or gaming console. This is a neat option if the kids have taken over the living room TV because you picked up a sweet Nintendo Switch bundle lately. Or as another alternative, there's also the handy website TVPlayer.com which allows you to live stream a bunch of other UK freeview channels too.

If you miss the live broadcast, there's no need to worry. You'll also be able to watch the new season's episodes of Doctor Who at your leisure by streaming it from the BBC iPlayer service as standard after each one has been broadcast on TV first. You can also watch this season's previous episodes right now, along with the previous seasons in full too.

How to watch Doctor Who season 12 online in the USA

Regular Doctor Who fans will be relieved to know that BBC America is once again the simplest option for watching Doctor Who season 12 in the US. The final episode will be broadcast live on Sunday at 8pm ET / 7pm PT. And if you missed any of the earlier episodes in the season, you'll find they are available to stream now on the BBC America site too. All previous seasons of the modern-era Doctor Who are available too, except the first season for some reason.

Watch Doctor Who online for free around the world

If you're not in the UK, then geo-blocking is going to block access to free UK streaming services if you try and get access. Well, most of the time...

Thankfully for all you holiday-makers and business travellers, you can get your device to think it's back in the UK via a handy VPN app. A VPN changes your IP address to a country of your choice, opening up a world of local alternative streaming options. VPNs are excellent for boosting your online privacy and security settings too from malicious snoopers.

There are lots (too many!) of VPN providers out there and we've tested a wide range of them on our best VPN for Netflix guide and found that ExpressVPN not only comes out on top for streaming global content but we find it's got the best selection of reliable server locations to connect to around the world along with reassuring privacy options. We especially love how the app can be set to automatically protect you on any public Wi-Fi, making browsing and shopping online less risky at a cafe or on public transport.

Follow these simple steps to get set up within minutes to get ready to watch Doctor Who online:

2: Connect the server to the relevant location
So for Doctor Who, that would be anywhere in the UK. A London server is usually the default, but you can pick any of the British city suggestions it offers.

3: Head over to TVPlayer.com
This free service is a nice legal way to enjoy livestreaming Doctor Who episode 2 tonight at 7pm (GMT).

How to watch old Doctor Who episodes and seasons

The BBC iPlayer has all the previous 11 seasons of Doctor Who since the revival of the show in 2005. If you want to really wind back the clocks though, then you might be interested to know that the new streaming service, BritBox, has all the classic episodes starting in the 1960s. Naturally, you'll need to turn on your VPN to get around any geo-restrictions involved.