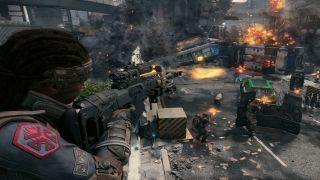 Professional Call of Duty players have dedicated their entire careers to playing and succeeding at this esteemed franchise, which means they've all played on every single map hundreds, if not thousands of times. Competing that much means they learn a thing or two about what works in Call of Duty maps, and they can identify where certain maps go wrong. With Modern Warfare 4 rumoured to be the next game on the horizon, we caught up with a few of the best Call of Duty professional players in the world to talk about what actually makes a solid map.

The resounding feedback from almost every pro player we spoke to was that for a Call of Duty map to stand a chance at being great, it absolutely has to stay true to the traditional three-lane principle of multiplayer map design. Kenny "Kenny" Williams and Preston "Priestahh" Greiner, two players from 100 Thieves who walked away with the trophy at CWL London, both said that's the most important thing, as did Seth "Scump" Abner from OpTic Gaming. But what does that actually mean?

Three lanes refers to the number of routes from one team's spawn point to the opposite teams'. One of the most obvious examples is Crossfire from Call of Duty 4: Modern Warfare. There's the huge, open street running through the middle of the map which invites medium-to-long range confrontations between players, but on either side are alternate paths through buildings more suited to close quarters combat. For a more recent example, consider Hacienda from Black Ops 4; there's two routes around the huge building in the middle, which is much more open in the centre courtyard.

To put it another way, Treyarch’s Studio Design Director, David Vonderhaar, once told us when discussing how to create the perfect Call of Duty multiplayer map: “It’s a very generic term to represent the idea that when you start a match - and you look out - you need to understand right away that the way to navigate the map is this way, this way, and this way. So there’s never more than (decision making wise) three decisions in your brain about how you move or where you check down, to where people can be. And that’s really key.” It's this concept that many pro players believe that Infinity Ward (who is heading up development on the next Call of Duty, rumoured to be Modern Warfare 4) needs to embrace.

As a concept and a design philosophy, it became somewhat diluted during the so-called "jetpack era" (Advanced Warfare, Black Ops 3, Infinite Warfare), where the lines between lanes were blurred more often than not due to the increased movement capabilities. With the series returning to a "boots on the ground" approach to gameplay across the three core development studios, the common consensus around pro players is that Call of Duty maps need to get back to basics – focusing on visibility, over verticality – and keep it tight with three lanes to thrive. No more, no less.

One of the frequent complaints from anyone who's played more than a couple of matches in Call of Duty in recent years is that enemy players can spawn behind you (and catch you unawares) with what appears to be a degree of randomness. There's nothing more infuriating than dying because your character doesn't have eyes in the back of their head, or because enemies are spawning in a location your team had just finished clearing of enemies. That's why Sam "Octane" Larew – player for 100 Thieves and winner of the CWL London MVP award – told me that along with having three lanes and being aesthetically pleasing, the "spawns need to make sense".

It's a vague concept and for the developers, it must be one of the trickiest aspects of map design – largely dependent on a number of server-side variables communicating appropriately with one another behind the scenes. Still, it cannot be overstated just how important sensible spawns are for a competitive multiplayer game – particularly for one as fast-paced as Call of Duty. And it isn't as easy as allowing one team to exert dominance over a corner of the map by making the other group of players spawn at the other end of the map. It's not, after all, difficult to shoot somebody in the back if they never see you coming, and it isn't all that fun for anybody involved. Given the time-to-kill ratio in Call of Duty, the spawn system is an absolutely vital component to the multiplayer and something that can make or break any map arriving in any given Call of Duty experience.

Get rid of head glitches

A "head glitch" in Call of Duty is when a player can stand behind an object and shoot over it, while only exposing a tiny amount of their head. Head glitches have been exploited in Call of Duty's multiplayer for as long as it's running, but it only works to promote slower gameplay rather than the run-and-gun style the series is so famously known for. Sure, that might be great for casual players who want to rack up as many kills as possible, but when it comes to the competitive scene and proving who's the actual better player? Cowardly camping isn't the way forward, not to mention how dull it can be for spectators.

Alongside prioritising three lanes, Scump reckons that making sure there's "not too much clutter on the map so it's not hard to see or there's not too many head-glitches" is vital. He went on to explain that's essential for faster gameplay, which Black Ops 4 actually is, despite some of its other drawbacks.

The biggest gaming trade-show is just around the corner, but will Modern Warfare 4 be one of the big E3 2019 games? Here's hoping that it is!

Finding a balance between all of the necessary elements to a Call of Duty map is no easy task. Modern Warfare and its sequel, Modern Warfare 2, are often considered to be two of the best all-time Call of Duty games, but they both had head glitches galore. You couldn't walk for five seconds without being picked off by someone with an M16 or a FAMAS sat behind a barrel or fence. The series has evolved since then and now the gameplay is much faster, head glitches are less common but that's introduced new problems like inconsistent spawns and a lack of defined lanes.

Infinity Ward has a mountain to climb to appease every Call of Duty player. The pros may have one idea of what makes a map fantastic, although that can indeed differ from player to player. Many in the competitive scene believe that Infinity Ward has the capacity to create one of the best Call of Duty games ever, even if it does have an impossibly high bar to clear to do so. What's important to remember is that, when it comes to Call of Duty, it's all about perfecting the basics; in multiplayer, we hope to see that reflected through tight three-lane map design, a larger focus on eroding glitches, and a larger focus on increasing fair-play through the spawn system. We won't likely have long to wait to see whether Modern Warfare 4 will deliver on this front.

All the E3 2019 games to expect this year, from the confirmed to the utter wildcards.