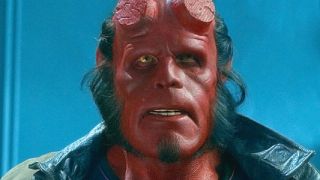 Hollywood giveth and Hollywood taketh away. There have been rumblings of a Hellboy return for some time but, like a cursed monkey paw wish, it might not be exactly what you’d hoped for. Yes, the cigar-smoking demon is coming back but Ron Perlman and Guillermo Del Toro won’t be returning – it’s a full-on reboot.

Entertainment Weekly has revealed that Stranger Things’ Detective Hopper – David Harbour – is in talks to play the Nazi-hating demon spawn, and the actor confirmed as much on Twitter. Less than cryptic tweets are all the rage these days, it seems.

But, of course, fans were clamouring for a third Hellboy movie with Del Toro and Perlman, to finish off the trilogy but no dice, so says the Hollywood higher-ups. Both GDT and Perlman took to Twitter in response to the news, Perlman to thank the fans and Del Toro to, uhh, declare his love for the Hellboy actor. That just makes me even sadder that the pair won’t be working together.

Looking forward to Hellboy coming back? Or is the franchise nothing without its two leading players? Let us know in the comments!