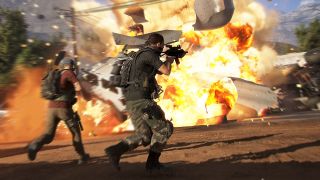 Has picking off cartel enforcers from half a mile away in Ghost Recon Wildlands gotten stale for you? That's understandable, the game has been out since March. Don't give up on it yet, though, or at least get ready for a second tour: Ubisoft is preparing to roll out a free 4v4 PvP mode called Ghost War in the fall, with a beta scheduled by the end of the summer.

No, Ubisoft isn't adding in Dark Souls-style squad invasions for when you and your buddies are roaming the open world (that's what Playerunknown's Battlegrounds is for). Ghost War is a separate mode where your squadmates will choose from a variety of classes and fight against another squad on a selection of set maps pulled from Wildlands' open world. There are even some new mechanics like suppression, which makes your screen blurry when under fire, and sound markers to make distant snipers easier to track.

It will be interesting to see how Wildlands - a game that, as of now, is all about fighting computer-driven opponents - will feel when you're up against your fellow players.

Haven't picked up Wildlands yet but Ghost War has your attention? Read through our Ghost Recon Wildlands review to see our thoughts on the base game.