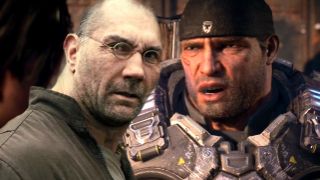 Dave Bautista has the physique, the attitude, the gravelly voice - everything you'd want in a live-action counterpart to Marcus Fenix, and now we even know he has the desire. Bautista confirmed on his official Twitter account that he's "tried everything" to nab a role in the upcoming Gears of War adaptation, but unfortunately, he doesn't sound very hopeful about his chances.

They’re listening. And they could give AF! .. but thank you for the support. Believe me when I say I’ve tried everything to make this happen. https://t.co/8THxKLkbdVJuly 23, 2019

"They’re listening. And they could give AF! .. but thank you for the support. Believe me when I say I’ve tried everything to make this happen," Bautista wrote in response to a fan's pleas.

Sometimes there's a casting choice for a movie that's just so right the whole world makes more sense because of it. That would 100% the case for Dave Bautista starring in the Gears of War movie. You can't even/ argue he's too much of a muscle-bound meathead to portray the more emotional elements of the Gears of War story - look at Sapper Morton, the tragic character he played in Blade Runner 2049. Marcus Fenix is basically halfway between Sapper and Drax the Destroyer, right?

According to Rod Ferguson, the head of the studio behind Gears of War 4 and 5, the Gears of War movie will be set in an "alternate reality" from the games. That frees it up to tell its own story that won't interfere with or contradict the established fiction of the games while featuring familiar elements. Theoretically, the movie could star an entirely separate set of characters from the Fenix gang, but that would feel a bit like making a Metal Gear Solid movie without Snake.

It sounds like it's still pretty early days for the Gears of War movie, so hopefully there's still time for this dream to come true.

Size up the competition for the Gears of War movie with our list of the best video game movies.