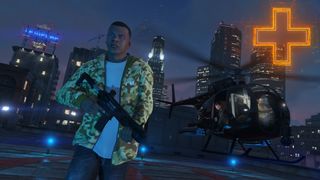 We're celebrating the end of an incredible decade for games, movies, and TV shows. GTA 5 is one of the games that defined the last 10 years of play, placing 7th in our 100 best games of the decade rankings. Read on to find out why...

They really don't make 'em like this any more. The genre Grand Theft Auto invented is more popular than ever, but these days most video game open worlds take us to far-flung, fantastical places; abandoning the inner city for the sprawling sticks, taking us back in time or dragging us into the far future. The era of copycats is long over, the pretenders to GTA's crown either killed off or transformed. Rare indeed is the game that seeks to take a bite of Grand Theft Auto's cherry, and GTA 5 is the reason.

Even now, six years on, Los Santos is remarkable. Sure, other games have it licked for sprawl and scope, for density and fidelity, and for things for you to do. But as a snapshot of city life in the modern-day US, and as a video game world that evokes a believable sense of place, it is unmatched. Throw a beefy PC at it and, while some technical elements are showing their age, it still takes the breath away. In 2013, on 360 and PS3, it was a staggering achievement. In 2019, it still is.

It helps that Rockstar has a real city to lean on. Los Angeles is a city of extremes; of offensive shows of wealth and desperate displays of poverty, a town of contradictions where Hollywood stars and oligarchs share hazy, smog-filled oxygen with gangbangers and the homeless.

As Franklin, the most traditionally GTA of the three protagonists, says early on, as he and an accomplice walk down an ominous-looking alley in the affluent Vespucci Beach: "One block makes all the difference." Los Santos takes LA's many juxtaposed contradictions and pushes them even further, and if you find the whole thing – characters, subject matter, story and setting – objectionable, then well, that’s sort of the point. If you root for anyone in GTA5, you do it in spite of yourself.

There was little to love about GTA Online at first either. Once Rockstar had finally spun up enough servers to let us out of the car park and into Los Santos, we found a sparse set of repetitive activities and an endlessly respawning gank squad on every corner. It has been updated just about every week since, and today GTA Online is arguably an even greater success than GTA 5 itself.

It's the driving force behind its enduring presence in the sales charts – at the time of writing it's been in the UK Top 40 for 307 weeks out of a possible 316 – and is believed to have made over a billion dollars in microtransaction revenue. Most remarkably, it has done so with a promo budget of virtually zero, and barely any press coverage. No other game does quite such a good job of showing you the latest shiny trinket – a sports car, a superyacht, a lavish nightclub with performance-captured crowd and DJs – and making you want it instantly. How very Los Angeles.

GTA 5 is a landmark open world, and a tentpole online game. But it may be some time before we see its like again. After all, what place does a biting social satire of modern-day American life have in a world that is already long past parody? Real life is extreme enough as it is. GTAV may have exaggerated all that was wrong with the America of the early 2010s, but by today’s standards, it’s a virtual utopia.

This feature first appeared in Edge magazine issue 339, as part of its celebration of the games that defined the decade. For more industry-beating access to the very best that the video game industry has to offer, why not subscribe to Edge?