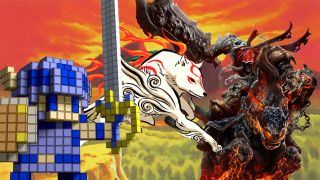 The video game industry owes a lot to The Legend of Zelda. Maybe that's why nowadays there are so many games which - either very clearly or maybe a bit less so - trace their influences back to the ever-morphing story about an elf boy in a tunic out to save a magical kingdom and rescue a princess (with a few dungeon stops and boss fights along the way of course). And while there can only be one true blue Zelda series, there are plenty of games that have crafted worthwhile and enjoyable experiences out of the foundation Nintendo built so long ago. We've collected 15 such titles here, in case you're looking for your next grand adventure. Enjoy.

A bit more surreal than most Zelda games, Anodyne takes place almost entirely within the main character's head. Instead of plain old wilderness, you'll be exploring abstract and quirky dreamscape versions of reality - some hauntingly beautiful, some lonesome and malevolent. There's a palpable sense of wanderlust and vulnerability in Anodyne, key staples of early Zelda games.

Take the original Legend of Zelda for NES, but swing the camera down so that instead of an eye-in-the-sky, top-down view, you're looking at the world in a freeview third-person camera. That is 3D Dot Game Heroes in a nutshell. With a heavy focus on exploration and dungeon-delving, plus basic combat and a health system measured in red apples, it really does feel like this game copied Nintendo's homework while only changing a handful of details.

That's not an insult, by the way! 3D Dot Game Heroes is a fun game in its own right, the blocky aesthetic makes it stand out (or at least it did until Minecraft became a phenomenon two years later), and you can customize your hero to look however you want. Go looking online and you'll find some creative character blueprints, including Cloud Strife, Mega Man, and even Link himself.

Psychonauts focuses on platforming - that is, jumping from perilous ledge to perilous ledge - quite a bit more than other entries on this list, and that's going to make it feel different from your standard Zelda game. However, there's still a great deal of emphasis on exploring a richly-detailed world full of quirky characters, environmental puzzles, and using abilities gained during your adventure to unlock new paths. This game never raked in the big bucks, but ask anyone who's played it and they'll gush about how unforgettable an experience it is.

Darksiders 1 is so blatantly copying The Legend of Zelda that it can feel a bit underwhelming. Darksiders 2, however, carves out more of its own identity. It adds more open spaces for exploration, gives protagonist Death (yes, you literally play as Death himself) more customization options in terms of playstyle, and even adds that oh-so sweet RPG staple, loot. It won't feel as much like Zelda as its predecessor, but there's still a big emphasis on exploration, boss fights that are as much about figuring out a puzzle as they are mashing the attack buttons, and uncovering hidden secrets.

You can find copies of the original game in bargain bins if you're lucky, but why not play on modern consoles and get the game looking its best with the "Deathinitive Edition"? Yes, it is a silly name.

11. Beyond Good and Evil HD

A cult classic that was loved by those who played it but never found wide commercial success, Beyond Good & Evil (or just BG&E) feels a bit like what would happen if you mixed in a dash of Star Wars with your Zelda recipe. You've got protagonist Jade, a girl with a mysterious past who must fight to overthrow an evil empire, and working alongside her is a ragtag group of rebels and her Uncle Pey'j - an anthropomorphic pig. Swap out Epona for a hovercraft and the Kingdom of Hyrule for the planet of Hillys, and you've got yourself one incredibly fun Zelda-flavored adventure.

Enter the Gungeon is a fantastic choice for players who like the dungeons of 2D Zelda games, but aren't thrilled by the combat. Trading swords for firearms of all shapes and sizes, Enter the Gungeon mixes Zelda with screen-filling bullet hell gameplay. You can also dodge roll to avoid damage, or flip over tables to give yourself cover. There's a great sense of momentum to Enter the Gungeon that will keep you on your toes. Even better, Enter the Gungeon is built for co-op, so a friend can join in on the fun.

If you want a game to gently take you by the hand and lay out all the fine details of its world and rules, carefully ensuring that you understand everything before you go venturing off into the wilderness... well, Hob isn't for you. Rendered in 3D with a gorgeous art style but presented much like a classic top-down adventure, Hob channels that lonesome, wandering spirit in a way that few games beyond the Zelda series itself can. You probably won't know what's going on for awhile, but the pull of puzzles and "there's a thing over there - I wonder how I get to it" will spur you onward.

Of all the games on this list, Hyper Light Drifter may be the one most likely to make you grind your teeth in frustration. A neon-tinted adventure set in a universe that's equal parts fantasy and sci-fi, HLD is full of mystery and challenges. There's a bit less emphasis on puzzles, but the game makes up for it with an intriguing world that begs you to explore and uncover its secrets. But really, the main draw here is the combat. It's fast and fierce, but as long as you're prepared, you'll make it out okay. Maybe.

7. The Binding of Isaac: Rebirth

Certainly one of the darker Zelda-inspired games on our list, The Binding of Isaac tells the story of Isaac, a young boy who must escape the murderous wrath of his own mother, whom she believes God has sentenced to death. Binding of Isaac won't take you to scenic vistas or force you to solve brain-bending environmental puzzles, but if you like a classic Zelda dungeon, this game streamlines that experience into a fast and frenzied dash. And as a roguelike, Binding of Isaac play sessions won't eat up much of your time - at least not individually. By the 27th "just one more" run, you may want to check what time it is.

Speaking of "dark," how's this one suit you? In Darksiders, you play as one of the four Horsemen of the Apocalypse - specifically, War. Humanity has been wiped out by premature Armageddon, and it's up to you to scour the blasted hellscape that once was Earth to figure out why. Each major step in the story requires players to delve deep into themed dungeons, and each dungeon contains a unique power up for War to use (such as bombs and a grappling hook). Sound familiar, Zelda fans?

With an edgy, comic book aesthetic (the world and characters were drawn up by longtime comic artist Joe Mad) and brutal combat, Darksiders is often lovingly referred to as "the best M-rated Zelda". If you're looking to play on a modern console, look for the "Warmastered Edition".

What if Zelda, but funny? Ittle Dew takes Zelda conventions and casts them in a humorous light. The top-down adventure puts you in control of a snarky young heroine as you battle cute creatures and explore underground dungeons. Aside from the focus on jokes, the biggest difference between Ittle Dew and the other Zelda clones on this list is its huge focus on block-pushing puzzles. Like... there are a lot of block-pushing puzzles here. Still, it's a small price to pay for an open world to explore at your leisure, gaining access to new items which allow you to explore previously closed-off areas, and a story that's bound to put a smile on your face.

A sequel, Ittle Dew 2, is available on PC, Xbox One, PS4, and Nintendo Switch, but it hasn't been as well-received as its predecessor.

Zelda games often give players an expansive world to explore and all the time in the world to explore it (even in Majora's Mask, Link could rewind time to avoid death by moon crash). Minit instead asks you to explore the world one minute at a time. Yup, 60 seconds is all you get before your life comes to an end, and only by living through a countless number of brief adventures can you lift an evil curse. It's an interesting twist, and one that may not feel too similar to the Zelda formula, but there's still that sense of exploration, puzzle-solving, and basic combat - it's just all crammed into, that's right, a minute.

This one goes out to all the Zelda fans who ache for another Four Swords Adventures. Spiral Knights takes that multiplayer dungeon-delving concept and multiplies it tenfold, into a full-on MMO. Sure you're not a tunic-wearing fantasy lad, but playing as what's basically a cross between a Digimon and a knight in sci-fi armor is just as good (and way cuter), and the everchanging Clockworks dungeon means infinite replayability. Plus, it's free!

Imagine the wolf sequence from Twilight Princess, give the wolf a magic paint brush, and expand that sequence out to a full length game. That's Okami. Well, sort of. Okami definitely has it's own unique qualities, like the hand-painted Japanese art style, deep combat system, and creative character design, but the Zelda influences simply can't go unnoticed.

Amaterasu, the game's white wolf protagonist, travels around the world, helping NPCs, battling hordes of dark spirits, and delving into dungeons as she attempts to bring life back to the cursed land. The way you earn new powers by meeting with mystical figures throughout your journey is reminiscent of the Zelda titles, and Ami even has an annoying, talkative little companion that will clue you in to the next step in your quest. So you take the Zelda good with the Zelda bad.

Undertale certainly strays from many of the Zelda series conventions, but if you're looking for an expansive world full of unique and interesting dungeons, unconventional and layered gameplay mechanics, and colorful characters, there are few games that would come as heartily-recommended as this indie darling. The game is practically a love letter to games of Zelda's early days, and there are even a few clever series references peppered throughout, if you're eagle-eyed enough to spot them. We don't want to say too much more for fear of spoilers, but trust us, it's better if you go in blind on this one.

Be sure to check out our article on the games like Minecraft and our list of the best Wii U games.