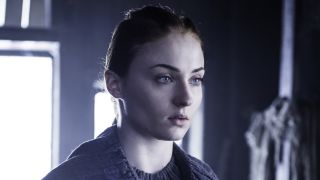 Beware: this article is dark and full of potential Game of Thrones season 7 spoilers. If you don’t want to know about Sansa’s possible fate, including a popular fan theory, then look away now.

Let’s get the big news out of the way: don’t expect any Sansa baby bumps this year. Fans have speculated about another Stark entering the world (as if we didn’t have enough to worry about) but, according to Watchers on the Wall, that’s just not happening. The fan site reported:

"Last of all, I am enormously happy to report that Watchers on the Wall can put a certain 'theory' to bed. If any in our readership believed a certain insistent rumor, the following may be a relief to hear: Sansa will NOT be (or get) pregnant in season seven."

Sansa’s potential pregnancy has been pored over since Ramsay Bolton got his hands on the elder Stark sibling in *that* stomach-turning scene. If you look at the show’s history of mothers and children, then things would’ve ended badly for Sansa.

A male heir would’ve done wonders to tighten Sansa’s claim as the true heir in the North but, now Jon Snow’s running the show, Sansa will have to turn to others for help. Littlefinger is licking his lips in anticipation.

Sansa does have some good news awaiting her, however. The Stark children will finally reunite in season 7. It’s been a long time coming (since season 1 by my count) but things won’t always be so rosy for the Stark trio. Arya and Sansa are rumoured to butt heads over how the North should be ruled.

On the more battle-heavy, non-Sansa side of things, expect a "dynamic and elaborate sequence" involving 300 wights. Yes, you read that correctly, 300 wights. Be still my frozen, unbeating heart.

Finally,  it looks like the end is in sight for Jorah’s greyscale storyline. Don’t get the tissues out just yet, though. Season 7 sees Jorah travelling to Oldtown to find a cure. Whilst there he’ll bump into another fan favourite – Samwell Tarly. A spin-off buddy movie unfortunately isn’t on the cards between two of Westeros’ most honourable men but Sam will do his darndest to cure Jorah of his affliction.