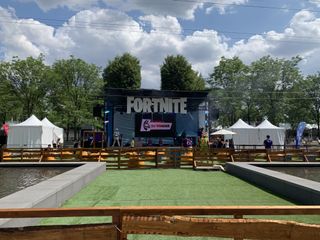 The first ever Fortnite World Cup is taking place this weekend at the Arthur Ashe stadium in New York City, and we've been fortunate enough to attend. There's two of us on-site from now until Sunday evening, and we're trying out all of the activities and events going on in the arena. The Fortnite World Cup Fan Festival is home to a number of games, activities and more that you can try out when you're not watching the matches in the arena, and we've got everything you need to see in the video below.

There's seven attractions in total to check out in the Fortnite Fan Festival, and while some of them won't be for everyone - we didn't quite fancy getting on stage and dancing ourselves - you can revisit your favorite four each day to complete your battle pass. James excelled at the Nerf Blaster Challenge because I struggled to even fire the gun, although I was much better at the mini golf and managed to beat his Baller Obstacle Challenge time by a mere 0.1 second.

There's multiple meet and greet stations available to say hello to your favourite Fortnite skins, from the Red Knight and Blackheart to Rex and Beef Boss. If you can't spot a character you want to meet, don't worry because they change over regularly. We saw a Peely too, which is just a heroic move in this scorching heat.

If prizes are your goal, then you'll want to get on stage. The Boogie Down Challenge has people competing in emote-offs, while the You've Got Game: Fortnite Edition requires you to test your Fortnite knowledge in a quiz show. There's also the cosplay showcase for those of you brave enough to dress up.

Keep your eyes peeled on the GamesRadar YouTube channel for more Fortnite World Cup coverage, and we'll have more written coverage from the event going up throughout the weekend.