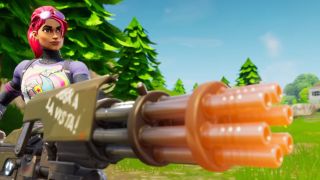 Fortnite Battle Royale's new gun is bound to be a treat for anybody with a healthy love for semi-controlled destruction. Epic just added update 2.4.0, AKA 'The One with the Minigun' to the game after a few hours of downtime - much less than it took for Update 2.3.0, AKA 'The One with the Chug Jug' to go live. That's good, because I really want to try out that minigun, ideally while shouting like Mac from Predator the whole time.

According to the official patch notes, the minigun is found in both Chests and Supply Drops (not just lying around in the world unless somebody else drops it, in which case they better already be dead). It uses light ammo and "fires almost as quickly" as an SMG, with much less frequent reloading. SMGs are great for tearing down structures in a hurry, and it sounds like the minigun will be even better suited for those purposes. Also for tearing down unwitting players who sincerely believed they were safe behind their brick walls.

Like to know when you have an audience? Battle Royale now automatically shows how many spectators are currently watching you in the lower left corner of the screen. You automatically pick up spectators when other members of your squad are eliminated or you take somebody else out, so do give 'em a good show. You can toggle "Show Spectator Count" under game options if knowing you're being watched would psych you out too much.

Oh, and here's a great quality-of-life tweak for those moments when you're tearing through a house, desperately searching for the loot chest: that distinctive treasure-aura sound is now louder if you're aiming at one. So take a look-and-listen around before you start swinging wildly. Personally, I still think loot chests should play "The Ecstasy of Gold" from The Good, The Bad, and The Ugly, but I understand that the licensing fees could be prohibitive.