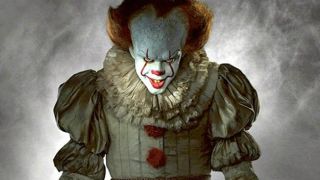 I’ll bet you were scared by the It movie. I was too. But, you’re probably wondering what keeps author Stephen King up at night? According to producer Barbara Muschietti, it was one thing in particular that gave the grandmaster of grimy scares the heebie-jeebies. Note that if you haven’t watched just yet that creepy spoilers await. You don’t want to ruin all those perfectly orchestrated scares, do you?

Speaking to Collider about the painting that creeps out Stan in his father’s office – and something Pennywise uses to play on his fears, Muschietti revealed how it made Stephen King’s hairs stand on end. His sweary response is pretty incredible: “The first email he sent to Andy [Muschietti, director and Barbara’s brother] when he had seen the movie, the one fear he wrote back, he said, ‘I fucking love the woman in the painting, it scared the shit out of me.’”

Without giving too much away, the woman in the painting surely stands out as one of the movie’s creepiest bits of imagery – and it actually stems from art in the director’s childhood home: “Our mom had a print of a Modigliani painting at home…It was something that terrified Andy always,” she revealed.

So, the moral of the story is this: take all of your childhood fears, make them into art and scare Stephen King. I hope he’s a fan of my sentient waterslide.

The It movie isn’t done with you yet. Not by a long shot. Check out the first It movie reactions, as well as the best It movie Easter eggs.