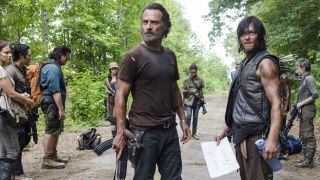 We’ve all been waiting to see which of our favourite band of morally-skewed survivors survived their brush with Negan’s baseball bat – even if the suspense has verged on a gimmick as The Walking Dead's marketing team milk the end-of-season cliffhanger for all its worth – and now AMC has answered our prayers by delivering a huge four-minute long sneak peek of the first scene from The Walking Dead season 7. Don’t expect any glimpses of who got beaten to a squishy mess, but we do know who definitely isn’t dead.

The first scene from The Walking Dead season 7 shows Rick very much alive (whoop!) but shaken and promising to kill Negan in an unnervingly calm manner.

The footage gives us a huge amount to dissect, but what stands out most is Rick’s bloodied face, a distinct change from the finale of season 6 where his cheeks were spotless. Did someone close to him get battered to a pulp - maybe Maggie (no, please god, no)? But in his speech, Negan (still smiling) touches on the importance of a right-hand man, which could be a shocking hint that Daryl or Glenn have bitten the dust. Or Negan could be talking much more literally, as hauling Rick off into a caravan with an axe might have horrifying results for Rick’s right hand.

Now you’ve seen the scene for yourself, who do you think has met their grisly end? Let us know in the comments below or vote for your favourite in the poll. And if you really can’t wait for this gruesome episode to air, you can always prepare yourself for the new season by watching the 2-hour long recap episode narrated by the cast.