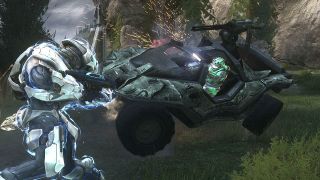 Halo: Combat Evolved Anniversary has begun its first test flight on PC, which is a fancy way of saying that it just started its first round of closed beta testing.

If you previously joined the Halo Insider program, you may have an email sitting in your inbox right now with instructions on how to start playing. If you weren't already signed up, it's too late for you to play this time. However, there will likely be more test flights for Halo: Combat Evolved, and for that matter Halo 2, Halo 3, Halo: ODST, and Halo 4 as their respective parts of the Master Chief Collection come to PC. Sign up now and you'll have a shot at getting brought on board for those tests.

The first Halo: Combat Evolved Anniversary test flight includes four campaign missions, multiplayer matchmaking with support for custom game modes, and an early sample of some of the customization options that you'll be able to use in the full version of the game.

Halo: The Master Chief Collection first came out way back in 2014, bringing improved graphics and modernized control and multiplayer options to what were then the four numbered Halo games. Though its launch was marred by technical problems, developer 343 Industries continued to support the game with regular updates and by adding in both ODST and Reach to the collection.

Contrary to its Xbox launch, 343 is bringing The Master Chief Collection to PC in order of the in-game chronology: it started with Reach in December, and next will come Combat Evolved, 2, 3, ODST, and 4. I think ODST technically takes place before 3, but as long as it still has that jazzy soundtrack, we're good.

Just because you're playing a Spartan doesn't mean your PC experience needs to be spartan too - check out some of our picks from the best PC cases for gaming.