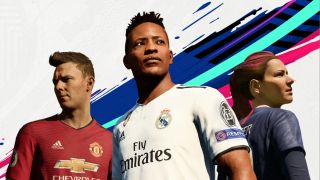 EA confirmed earlier this summer that FIFA 19 would see fictional footballing superstar Alex Hunter return for a third and final instalment of popular story mode The Journey. Now we know it's called The Journey: Champions, and he won’t be coming alone – as long-time pal Danny Williams and sister Kim Hunter were today announced as playable characters.

While both have been introduced in previous outings – Williams (played by Chris Walters) in FIFA 17, Kim (Lisa Solberg) last time out – this year EA says they share equal billing. Regardless of where he finished last season Hunter starts out at Real Madrid, with the newly added Champions League central to his story. Kim’s focus is establishing herself in the US national team, while the trailer shows Danny Williams in a Manchester United strip – suggesting he, like Hunter, has scored a big-money move in the summer between FIFAs 18 and 19.

Cut-scenes appear to show a burgeoning rivalry between Hunter and Williams, as each seeks to win the Champions League with his respective side – but EA must be careful not to retread the storyline of the original Journey, which saw Hunter meet childhood-friend-turned-Premier-League-rival Gareth Walker in the FA Cup final at Wembley. Still, it looks promising.

Intriguingly, you’re able to switch between the three main characters at any time, suggesting that while the storylines are intertwined they’re not as linear as in the first two outings. GR will have a full walkthrough shortly before release.

FIFA 19 is released for PS4, Xbox One and PC on 28 September. For a detailed look at how it plays, check out our hands-on answering all your questions regarding the new game.