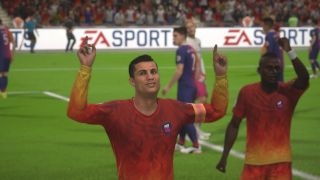 Few items within Ultimate Team are as highly sought after as Team Of The Year cards released each January – and for FIFA 18, they're getting a new twist with 60% of the 'TOTY' voting being done by those who play, rather than develop, the game.

55 players are nominated for the Team Of The Year, based on performances throughout 2017. Of those 55, select celebrities and high-profile Youtubers, such as Bateson87, are being asked to vote for their final 11 based on feedback from their audience. It means that while the 'real' team of the year selected by FIFA was mostly made up of La Liga players, the virtual one should contain a cross-section from every major league.

The remaining 40% of the vote will come from EA. That's actually a good call, given the community's obsession with Premier League players – it means that while a handful of 'BPL' stars are likely to make it in, the squad won't be solely made up of favourites from the game's most popular league.

Voting, using the Twitter hashtag #TOTYVote, closes on 12 January, and the nominated players are as follows:

Here's my best guess at how the final team will line up, based on analysis of that hashtag and in-game trends. For instance, Bonucci was a surprise omission from the current Team Of The Week – which may mean EA has him lined up for one of the TOTY centre back slots.

FIFA 18's Team Of The Year will be revealed in game from January 15 onwards. If you're looking to boost your in-game dollars in order to buy some of these guys, be sure to bookmark our FIFA 18 coin-making guide.