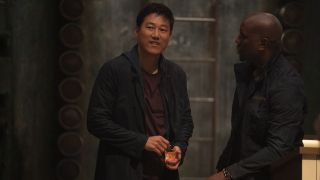 It wasn’t just the action set-pieces in the Fast and Furious 9 trailer that had jaws dropping: the plot twists were equally gasp-inducing. As well as introducing John Cena as Dom Toretto’s long-lost brother, Jakob, the trailer also revealed that Han (Sung Kang) had returned from the grave.

The franchise has a tradition of bringing characters back from presumed death, and there has been a longstanding #JusticeForHan campaign online. The character first appeared in director Justin Lin’s low-budget crime drama Better Luck Tomorrow, before being seemingly killed off in Tokyo Drift.

The Fast series’ chronology meant Han appeared in subsequent ‘prequel’ film, and in Fast and Furious 6, it’s revealed that Han was ‘killed’ by Deckard Shaw (Jason Statham). The fact that Deckard later became cosy with the crew was contentious for some Fast fans.

“Han means so much to me because he was a character before Fast & Furious,” Justin Lin tells our sister publication Total Film magazine in their new cover story. Appropriately enough, it was at a 15th anniversary Sundance screening of Better Luck Tomorrow that Lin first learned about the #JusticeForHan campaign.

“Somebody asked me about Han and [Deckard] Shaw,” says Lin. “I was like: ‘Wait, what? Shaw is at the barbecue in 8?’ [laughs] Really, I was so confused. One of the big reasons to come back was I felt like we needed to correct something.”

Precisely how Han returns is one of the film’s closely guarded secrets, though (much) stranger things have happened in the Fast films. “Let’s just say we’re not hiding the fact that a lot of the stuff is crazy!” co-star Michelle Rodriguez says. It’s Letty who announces Han’s return in the Fast 9 trailer, and she’ll be instrumental in bringing Han back into the fold. “In a lot of ways these movies are like the Olympic games. There are a lot of cultures that feel represented by individual characters from the franchise. And Han does that for an entire community.”