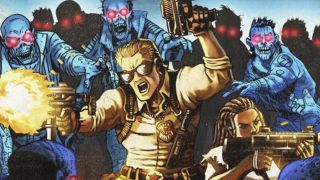 Did I ever tell you the definition of insanity? Because Ubisoft has announced the three expansions coming in the Far Cry 5 season pass, and they certainly sound wild enough that some would describe it as such. In Dead Living Zombies, you’ll be putting hordes of the undead back in their graves. In Hours of Darkness, you'll be transported back in time to the Vietnam War to fight the Vietcong. Lastly, Lost on Mars gets your ass to Mars so you can - what else? - shoot alien bugs.

Unfortunately, descriptions of these DLC additions are all we have right now. There are no details about how exactly these scenarios will play out or how much content they'll offer, nor any in-game screenshots or video. Don't get me wrong, I'm excited, but I'll also be waiting for gameplay footage before making a purchasing decision.

Thankfully, there is one thing coming in the season pass that I know I'll enjoy: Far Cry 3 Classic Edition. Yep, the Far Cry that for many still stands as the apex of the series is coming to PS4 and Xbox One. Far Cry 5 season pass holders will get a copy of the game for free, four weeks before it goes on sale as a standalone purchase. Since the game is already available on PC, Far Cry 5 season pass holders on that platform will just get a free copy of Far Cry 3.

No specific enhancements were announced for the Classic Edition, but I imagine it'll support native 1080p and have improved sound at the very least (though, again, that's just my speculation - we'll have to wait for more info from Ubisoft to confirm).

Either way, if you're itching to return to the Rook Islands, you can either go all-in on Far Cry 5 or just wait a month to get your chance. Then you can hang-glide, start fires, and eat mushrooms to your heart's content. Again and again. Which reminds me...

Did I ever tell you the definition of insanity?