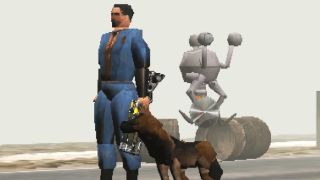 These videos are the work of YouTuber 98DEMAKE, who earns bonus points for mocking up the box art as well. Just look at this Dark Souls PS1 disk:

And then there's Dark Souls itself in glorious PS1-o-vision:

Elsewhere 98DEMAKE's had a go at reimagining all sorts of famous games, including a recreation of Far Cry 5's E3 2017 trailer.

Then there are the classics, such as GTA 5 with Michael, Trevor and Franklin leaving a trail of pixelated blood across Los Santos, complete with terrible draw distances and fog.

If that wasn't enough to make you realise just how far technology has come, take a look at Fallout 4, a game that defintely would have crumbled under the limited power of PlayStation 1. It's basically just a lot of post apocalyptic fog, thanks to the flawless recreation of 1998's rendering distance.

The Last of Us at least fairs a little better, as long as you don't mind vegetation in the form of flat textures and houses that look like shoe boxes.

And, to finish, there's Outlast in all its retro glory. This defintely invented the 'door opening' idea first, okay. And not any other PS1 horror games you might be thinking of.

That's pretty much all there is for the time being, but check out 98DEMAKE's channel for more. These have all appeared in the last month so they've only just started and you can already see the recreations getting better. Be interesting to see what they do next.