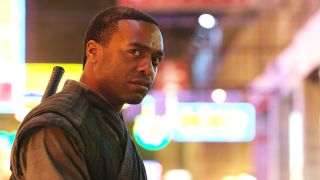 Fans of the comic book are also in for a treat, as the movie won't exactly stick to what's on the page. The Ancient One, for example, is being played by Tilda Swinton, and Strange's long-time rival Baron Mordo is actually his friend.

So why the big change for Mordo? Marvel boss Kevin Feige explains to /Film why they opted to rein in his villainy. "[Mordo] is Strange’s advocate in the beginning of the movie. The Ancient One doesn’t necessarily see the potential in Strange that Mordo does, and Mordo is the one who talks the Ancient One into allowing him in. And for this film, he is a partner of Strange, and he is a mentor to Strange."

"You know that was something we wanted to play against in the comics. Because in the comics for as unbelievably creative and full of imagination as they are - we are desperate to recreate in cinematic form - there’s some things that are too obvious for modern day audiences. The jealous rival named Baron von Mordo, who turns against him when he shows any signs of talent - we specifically didn’t want to do that. It’s one of the reasons we cast Chiwe because we wanted to have someone who had sort of unbelievable authenticity in delivering a lot of wackadoo lines and exposition."

If you're going to change things up in the transition from page to screen, this example is one that's hard to argue with. There's always parts of the MCU that don't quite align with the source material and that's totally fine; they're different storytelling mediums. But hey, could this be Feige doing some masterful misdirection? There could be a chance Mordo drifts over to the darkside....