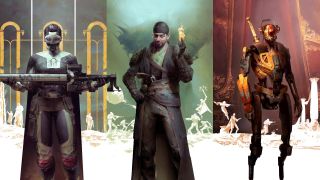 As Destiny 2: Season of the Drifter winds down, Bungie's been dialing up the intrigue on the upcoming Season of Opulence and its accompanying Penumbra DLC. Today the studio revealed that the raid included in Penumbra is titled Crown of Sorrow, and will launch on Tuesday, June 4, the first day of the new season. The recommended Power for the first encounter of Crown of Sorrow will be 715, so it'll probably scale up to around 730 Power.

Destiny 2 raids normally launch on Friday after their respective DLCs release, so it's strange to see Crown of Sorrow release at the start of the season. It won't be live until 4pm Pacific, around three hours after the DLC itself, but it's still launching on day one. Bungie says this was a purposeful change intended to improve the world-first raid race.

"The world’s first race for a raid is a competitive event," Bungie said. "The raid is a challenge geared toward testing a fireteam’s ability to learn and execute on the mechanics, as well as their ability to overcome enemies and bosses together. Having a short window of time between release and launch allows us to preserve the combat challenge for players making their attempt on day one and get people playing the raid content right away."

To that end, Bungie will limit some aspects of Power gain at the launch of Penumbra. For starters, the Last Wish and Scourge of the Past raids will be unavailable until Crown of Sorrow has been beaten. This will prevent players from cashing in Ethereal Keys to jack up their Power, and it means the first team to clear Crown of Sorrow will re-unlock the other raids for other players.

Additionally, Prime Attunements - i.e. Prime Engram drops - will be reset to two charges per character at the start of the season, preventing players from getting a dozen or more powerful drops off Prime Engrams alone. Once the season begins, however, you'll begin accumulating Prime charges like normal.

This week saw the surprise release of the Destiny 2 Outbreak Perfected Exotic pulse rifle, and you'd better believe we've got a full guide on how to get it.