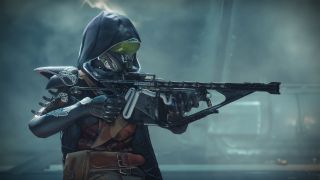 If you haven't heard, Destiny 2 Season of the Drifter and the Joker's Wild DLC have arrived, delivering a smorgasbord of content and updates for Bungie's shared-world sci-fi shooter. On top of Gambit Prime, The Reckoning, and reams of balance changes and bug fixes, the big update also quietly added four new Exotics to the game. These Exotics weren't mentioned in the lead-up or patch notes, and we know that least two more Exotics - Thorn and one mystery item - are still on the way. But let's focus on the new Destiny 2 Exotics we already have (and their nifty ornaments), because some of them sound freakin' sweet.

A kinetic linear fusion rifle. Huh. Somehow this feels like an apology for all the kinetic sniper rifles which rolled with Genesis, a perk that relies on matching your weapon's element to your target's shield type. You can see how the whole kinetic thing would throw a monkey wrench in that. That aside, Arbalest sounds pretty cool. It uses energy ammo, for starters, and it's nice to see linear fusions outside the heavy slot, where they never get much use. Its unique perk makes it a universal shield buster, and its other main perk, Disruption Break, leaves enemies more vulnerable to kinetic damage (i.e. a follow-up shot) after you break their shield. A unique Exotic that synergizes with itself? I'm game.

The other three Exotics added in the Season of Drifter are all gauntlets, one for each class. Warlocks got Getaway Artist, with a unique perk that lets arc Warlocks consume their grenade to summon a souped-up Arc Soul, better known as an Arc Buddy. Arc Buddies are pretty strong in their own right, so I can't wait to see what a buffed version can do. Is a Super Arc Buddy worth an Exotic slot? We'll see.

Stronghold might just be the Exotic that swords have been missing. Swords have never been terrible, and overall I'd say they benefited from the seasonal balance change, so we may see them used more frequently in the Season of the Drifter. By letting you guard infinitely and even heal off well-timed guards, Stronghold gives swords huge defensive ability which could be handy in high-level content. I can definitely see Stronghold leading to some impressive Nightfall solos.

This is probably the pair of gauntlets that I'm most excited about, and I'm a Warlock main. Hunters have a harder time recovering health than the other two classes, so the unique perk on Liar's Handshake could just be a godsend. It lets you dish out a healing melee counter after you land your charged arc melee or after you receive a melee attack yourself. That is, by all accounts, pretty cool. And in an activity with lots of Thrall and the like, or in the hands of an aggressive Crucible player, that healing counter could be pretty strong. If nothing else, it's certainly an interesting Exotic. For that matter, the Exotics in the Season of the Drifter are all pretty intriguing, which is more than I can say for some Destiny 2 content drops.

These Destiny 2 short stories tease a dark storyline rumored to be connected to Destiny 3.