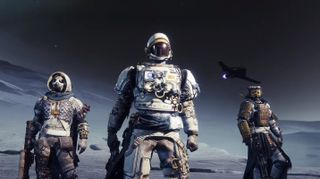 Update: Bungie has revealed the T-Shirt design for its Guardians for Australia fundraiser that will donate the proceeds of the sales to the Australian Wildfire relief effort. The T-shirt is now available for pre-order on Bungie's store, and will also come with a code for an in-game emblem.

Bungie has also expressed its thanks to local Destiny players in Australia who have already raised over $14,000 for the Australian Red Cross in a separate appeal for donations.

You can see the T-shirt design below:

Destiny 2 developer Bungie has announced it is developing a limited edition T-shirt to fundraise for Australia's firefighting efforts and the country's animal rescue and conservation efforts.

The T-shirt comes with an exclusive "Star Light, Star Bright" emblem code with your purchase and is set to be available for pre-order on the Bungie store and Bungie EU store from January 16 - February 18 at 9am PST.

The news was posted in the latest This Week at Bungie post: "The bush fires currently ravaging Australia have been devastating," Bungie's senior foundation manager Christine Edwards wrote, "many people have lost their homes, firefighters are risking their lives daily, and an estimated hundreds of millions of wild animals have fallen victims to the fires."

Edwards highlighted the other efforts that have been made by the community over the past two decades, such as supporting thousands of children through Bungie's iPads for Kids program, and helping victims of hurricane Katrina and Harvey, and donating to those affected by the earthquakes in Haiti, Japan, and Nepal, saying "time and again, you have been guardians to others in their greatest time of need."

Half of the proceeds made by the t-shirt sales will be donated to WIRES, which is Australia's largest wildlife rescue organisation. The other half will be donated to the NSW Rural Fire Service in the state of New South Wales, which has been especially hit by the fires.

The design of the t-shirt is currently still in development, but Bungie says it plans to reveal a preview of the shirt next week. The Australian fires have greatly impacted the country, destroying thousands of homes, and devastating natural habits and national parks. It's great to see Bungie create something in support of the fire relief effort in the country and offer Destiny 2 players an "avenue to lend a helping hand."

In other news, Overwatch and Apex Legends players call for developers to make charity skins to raise funds for the fire relief effort.