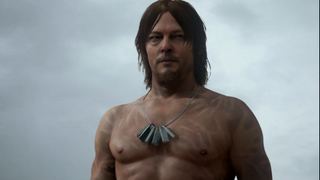 Kojima Productions has been tweeting out some new info on Death Stranding clarifying a release window and a few other details.

First up, the date:

The Tokyo Olympics are obviously set for 2020 which isn't an implausibly long time if the game's still in its early stages of production. Kojima's talked about only just getting offices and equipment set up, look:

The Akira reference is a bit weird though. The original is set in 2019 but that 'new' mention is odd. Is he having a dig at the ongoing attempts to make a live action one? Because that is never happen.

Whatever the date is it's fixed (for now).

Yes, Death Stranding has a set release date. Duh, how else would we be able to set a budget?September 18, 2016

In terms of what the game will be, Koj is still banging on about sticks and ropes (although Death Stranding will also involve aliens, apparently) and but we know the co-op will be 'new' in some way. If that doesn't take your fancy you can still play it single player if you want.

Straight from the event: Death Stranding will feature a new form of co-op play but will of course be fully playable in single player.September 18, 2016

And then there's that female star. We've already got Norman Reedus on board obviously, and strong rumours that Mad Mikkelsen will be in Death Stranding alongside him. Now, it appears Kojima might be looking for a third actor.

Death Stranding's casting is still under way... Will there be a heroine? Who should play her?September 18, 2016

That seems to be all the info currently. Let's say a 2018/19 release date and possibly with a female star joining Reedus and Mikkelsen.