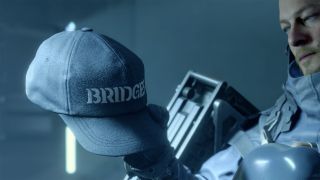 Just when you think the Death Stranding news has come to a standstill, something pops up that drags you back in - in this case, it's that composers turned to Home Depot to create some of the game's sounds. According to a Polygon article written by composer Joel Corelitz, Sony suggested Corelitz reach out to Kojima Productions' audio director Ludvig Forssell and offer his services on the Death Stranding score.

Corelitz writes that Forssell had a clear idea of what Death Stranding would sound like, "He had lots of ideas about the kinds of aggressive, sound-design-driven timbres and textures he thought would make the score unique. He wanted the music to be disorienting, aggressive, and unrelenting. He wanted a big, modern, epic, cinematic sound - but without the instrumentation that we typically associate with that kind of score. I could tell that this was going to be a production that was as much about its palette as its compositions." That clear idea led to directly to the cavernous aisles of Home Depot.

Creating the Death Stranding score was "a strange process for a strange game," writes Corelitz. The need for strange, disorienting sounds drove the composers to seek out unorthodox methods to create those sounds. "Shopping at Home Depot, guided by our ears, was a highlight of the project," Corelitz writes. "We held metal vents up to our ears and tapped them to hear what they sounded like up close, with the vents closed, and again with the vents open." The team bought whatever Home Depot item sounded cool, no matter the purpose. For Corelitz, that meant buying and testing, "paint rollers, ceramic tiles, bags of bolts, wooden planks, metal ductwork, chains, and a lot more," Imagine being the Home Depot cashier ringing up that shopping cart.

It's no surprise Kojima Productions tried something different during the creation of the Death Stranding soundtrack. The game itself is an amorphous being, ironically difficult to put in a box, despite its subject matter.

Forget shopping at Home Depot, we've got the best Black Friday game deals you could ever want or need.