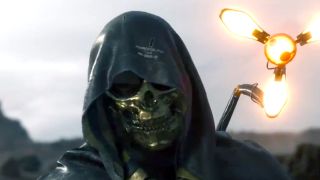 After years of existing as an amorphous, inky blob, Death Stranding is finally taking shape before our eyes: first with actual cargo-hauling gameplay at E3 2018 and now with what looks very much like the intro cinematic to a boss battle. Game director Hideo Kojima shared two versions of the new scene on his Twitter account after it debuted at Tokyo Game Show 2018: the English dub with Troy Baker (whose many roles include Sam from The Last of Us) playing the antagonist, and the Japanese with Satoshi Mikami (who you've probably heard before if you watch subtitled anime).

Here it is in English.

Even in a game that so far seems to be about death, birth, connection, isolation, and package delivery, Kojima can't help but put together a damn cinematic boss fight intro. Though we don't know this is actually a fight even if it feels like one. Nothing we've seen about main character Sam so far suggests he's a hardened warrior like Solid Snake, so maybe you'll just run the hell away instead. That's what I'd do if I encountered a giant goopy tiger thing made out of tortured human souls.

Also, judging by the fact that Kojima himself retweeted this, one of those souls may be Kojima (click through for the full version).

As for the Man in the Golden Mask, he looks like a sinister counterpart to Sam, with a similar hooded outfit and even his own weird little baby pod (though his glows red). This trailer is the first we've seen of his character, and it also very briefly reveals another: the person in glasses who seems to be Sam's current cargo. Sam really is a full-service porter; he hauls your luggage and you to boot. Whoever Sam's passenger is, I hope they tip well.

Check out another side of Death Stranding with this hint at 'global player collaboration' from Mads Mikkelsen. Now that's a sentence you could only ever write about a Kojima game.