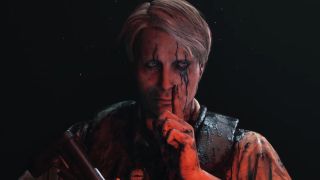 Death Stranding actor Norman Reedus recently claimed that Hideo Kojima's mysterious PS4 exclusive has 'elements of social media', and now co-star Mads Mikkelsen has confirmed that the gameplay 'needs collaboration from different people from different parts of the world'. Mikkelsen shared this tidbit and fresh insight on Hideo Kojima's creative process while talking to Total Film magazine during the Cannes film festival for the premiere of his new movie, Arctic.

Mikkelsen found the mo-cap process unusual, but was impressed by Metal Gear creator Kojima's clarity of vision. "It’s been a little surreal, because obviously there’s nothing. We do everything. It’s mo-cap. But the storyboard is so immaculate," Mikkelsen said, "He (Kojima) tries to explain it again and again and again, and I thought I had it, but then this happens and I've lost it again. It’s too complicated. It’s too crazy. It’s too beautiful. It felt a bit like being in drama school: “Just jump in and improvising this scene. This is what happens. Don’t question it.”

The Hannibal star is convinced that Death Stranding will break new ground. "It’s wonderful, and I can tell from the little things I’ve seen – some things, it’s not done yet – but I’ve never seen anything like this. And he’s not happy with it yet! It’s going to be ballistic," Mikkelsen claims.

Death Stranding's motion capture was unusual, Mikkelsen notes, due to the challenge of being strapped with cameras: "That was weird. It was everything we’re not supposed to do, right? If you interact with people, if you see someone, you hug him. And then all of a sudden, you have a camera here, he has a camera, and we go bang bang. And they keep saying, “It’s OK, you can go like this and hug. I have to accept that they (the cameras) will add to it – as long as we give as much emotion to it as we can, they will add to it. But it’s tough for us (actors) to accept. We’re basically greedy people. We wear tracksuits and run around. It’s fun."

Mikkelsen has previously been quoted saying that he didn't initially understand the plot of Death Stranding and that his character may not necessarily be the villain. He does, however, know collaboration is core to the way it plays: "The whole concept of playing the game, as I understand, needs collaboration from different people from different parts of the world, which is also another level of fantastic-ness."

We don't know *exactly* how Death Stranding will encourage - or require - players to work together, but Kojima has talked about the core concept being 'sticks and ropes' that encourages people to build connections. You can read more about how this links to the game's themes in our Death Stranding breakdown. The notion of bringing players together – both virtually and in real-life – has long been a motif of Kojima's work.

How Hideo Kojima encourages players to work together

Metal Gear Solid 5: The Phantom Pain invited players to build nuclear weapons to obtain a Trophy / Achievement. The nuke provided limited in-game benefit, but took 24 hours to build and turned the player into his full Venom Snake 'demon' form. However, there was a hidden objective: if every MGS5 player in the world relinquished their nukes, it would trigger a surprise disarmament cut-scene. This led to an online MGS disarmament community, encouraging others to take part in the shared goal. Kojima's intention was to bring players together and comment on the difficulty (or otherwise) of global collaboration and the futility of the cold war.

Back in 2003, Hideo Kojima's Nintendo DS action RPG Boktai encouraged players to physically go outdoors and enjoy the sun – powering up their character via a daylight sensor attachment. The playable Silent Hills teaser PT was less about horror, and more about players joining online to solve its obscure puzzles, as outlined in this video by YouTuber YongYea. More recently, all Kojima's pre-release trailers are engineered to encourage community debate. I interviewed Hideo Kojima back in 2012, who talked about feeling a responsibility for his audience, which I expanded on in an MGS5 trailer analysis for The Guardian:

"Kojima's never shied from social commentary, and I think there's something to be said about (MGS5's) deliberate blurring of reality and fantasy, as a means to comment on our 'always on' society. At last year's E3, Kojima talked about getting old and making a game about 'love and family'. Only a few weeks ago, he said this was still in his mind, but he was more concerned with turning 50, how this made him feel, and a sense of duty to his fans: the need to pass on something worthwhile. What greater concern might we have for the young generation than the rise of the virtual? The way we can dissociate ourselves from reality with tablets, phones, social media, games etc – is this healthy?"

A deeper dive into Death Stranding's plot theories would fill several articles, but there are compelling arguments that the game is about players working together. Kojima has said Death Stranding has a 'new form of co-op' and Norman Reedus recently said "The concept is so mind blowing, because it's not like 'Kill everybody and win the game!' It's a connecting thing". Reedus also talked about how millennial culture is about being alone, but Death Stranding is set after that and about re-establishing physical connections.

OK, some theories: What if Death Stranding is about a virtual generation, think Ready Player One and transhumanism, who are being forced to work together (for reasons unknown)? And / or a technological development has led to environmental collapse, and the end of death as we know it (quite literally 'death stranding'). The game clearly explores multiple realities / universes, and the relativity of time - but is this virtual (i.e. digital), metaphorical or literal? Or all three? Its especially curious that Norman Reedus' team all wear handcuffs with little 'life bars' that glow the same colour as a DualShock 4. There's also a sense that they represent fallen players in a world which is *literally* a video-game, where the oily handprints represent a new player trying to pull them into the 'game'. The Timefall purgatory state is almost like an online lobby where we're used to seeing spinning wheels as the game 'establishes server connection' or 'seeks new players'.

If that wasn't wild enough for you, consider that there is only one baby in all the trailers, which is being passed between protagonists. What does it represent? A form of 'extra life' token? An exemption from play? A chance to be physically reborn? It does appear that all the game's protagonists are passing the baby around, almost like a football, trying to move it from one point to another… but why? Will Kojima covertly induce us all into a global online game of 'hold the baby'? What if the child represents a form of messianic redemption… and the five shadowy figures are the archangels of the apocalypse / a distant civilisation?

Follow @GamesRadar and @DanDawkins for the latest Death Stranding news, rumors and analysis.