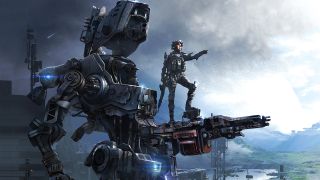 I adored Titanfall when it came out; it was fresh, fast-paced, and finally clued me into why so many people are obsessed over mechs. Seriously, I never understood the whole gundam thing until I punched a Titan until it exploded. Then all became clear. My enjoyment of the game eventually waned, in part because there just wasn’t quite enough to it, but also because it never felt like I was able to put my personal stamp on it.

I could pick my pilot, choose my loadout, and trick out my Titan with my choice of guns and frame, but it all felt very generic and anonymous. Hell, the side you were fighting for could change from match to match. I enjoyed the mechanics of Titanfall, but I never felt like part of the world, merely someone borrowing tools and then giving them back when I signed out. I’m hopeful that Titanfall 2 will provide players the opportunity to feel more of a connection to their in-game self; the quick and dirty route to allowing players form an emotional bond with a game is to let them customize their character, but let’s be honest - Titanfall isn’t about the pilots, it’s about the Titans. So what I want, more than a single player mode, more than a bounty of new map and game types, is the ability to bedazzle the ever-loving crap out of my Titan.

If I’m going to spend hour upon hour in a game world, I want to feel like I’m exerting some kind of influence there. The very nature of multiplayer games means the slate gets cleaned regularly - a hero one round is a zero the next - so you can’t really have any kind of lasting impact on the universe, but even a brief moment of “I was here” can be enough to make you feel invested in a game world. So I want my Titan to be more than just yet another soulless mech plummeting to earth. I want to make it pink and put cat ears on it and have it spray glitter and rainbows across the map when it explodes. Or maybe it can have a cute hat, a little fascinator shaped like a chicken. Whatever. The important bit is, for that brief time that it’s in the match, my Titan will have been exactly that: *my* Titan.

This isn’t about making Titans girly, by the way, despite my desire for sparkles. It’s about making Titans personal. Distinctive. One of a kind. Say what you will about Destiny, but it understands the player’s desire to feel unique, even if they’re actually doing the same exact thing as everyone else. Ok, sure, we’re both in the Prison of Elders for the billionth time (oh my god, Variks, shut UP, already) but even if we’re both playing Warlocks, we look completely different. Your character is an extension of you, your personality, your sense of humor, sense of style, sense of self. The color shader you choose for your armor does absolutely nothing to influence how well you play the game, but does everything to influence how you feel while doing it.

It’s a simple truth that we enjoy things more if we helped make them somehow, and taking advantage of even basic customization options is a simple way to become more fond of a game. Jet Grind Radio on the Dreamcast was far ahead of its time when it let you upload your own art to use as graffiti tags (I went with classic Varga pin-ups, myself), and Serious Sam let you select the color blood that sprayed everywhere as you ran backwards and shot everything in sight (I chose flowers). Neither of these options impacted the gameplay in any substantial way, but they feel meaningful to me years later nonetheless. Admittedly, it’s a lot easier to let players go bonkers making a game their own when it’s single-player - the only person they have to worry about offending is themselves, or maybe their dog. Multiplayer customization always has to be on the lookout for penisis and pot leaves, but there’s still loads of room to make stepping into your Titan feel less like donning a generic uniform and more like slipping into that favorite shirt you’ve had since college.

Look, it makes absolutely no canonical sense for Titans to be distinct. They’re vehicles of war, like a Jeep or a tank, and as such, the idea that one would be sporting a whimsical chicken hat is utterly stupid. I know this. I simply don’t care. Even if I end up losing the match, the moment of joy I get from seeing my creation guard me when I’m on foot will let me sign off feeling good about having played. And that feeling, more than anything, is what will keep me coming back.