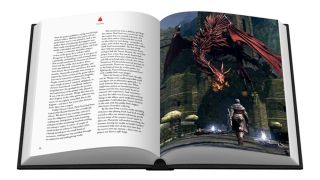 A Kickstarter project to create a deluxe hardcover edition of Dark Souls book 'You Died: The Dark Souls Companion' has launched.

The original paperback version was written by Keza MacDonald and Jason Killingsworth, and was first published back in April 2016. Focusing on examining the game's mysterious lore as well as the stories that have sprung out from people's time in Lordran, Dark Souls fans took it to heart.

Now, this Kickstarter is aiming to create a version of the book that matches the intricate detail of the game that inspired it. Writing on the Kickstarter page, author Jason Killingsworth explained why he is revisiting the project: "The hardcover edition of You Died felt like it just needed to exist. A game as timeless as Dark Souls deserves a classic-feeling volume that will look striking on one's shelf or coffee table."

This isn't just a republishing of the book either. Not only will it have revised and updated text, there'll also be screens captured by Duncan Harris, who creates video game photography as Dead End Thrills. Killingsworth has also recruited Edge Magazine's art editor, Andrew Hind, to help redesign the full-colour book. Check out a spread from the book below.

Right, you're probably wondering what the reward tiers are. For €45 or more, you get a copy of the book, whereas for €55 or more, you'll get a 'Way of the White' variant cover. €80 or more will get you both, which you can see below.

€150 will not only get you both books, but you'll also receive a limited edition 'You Died' poster, as well as having your name carved into the book's acknowledgements section. €295 or more will net you the 'Gravelord Servant Edition' which is leather-bound and comes with its own protective coffin, which is pretty thematically appropriate for Dark Souls, as well as the poster.

Finally, €1,000 or more will get you everything mentioned thus far, as well as your name "symbolically encrypted" into the book. You'll know where you name is, but no-one else will... Well, give or take the designer.

If you're a Dark Souls fan, then you can contribute to the Kickstarter project here, which is looking to raise £42,794 to get this ultimate version of You Died made.

Not played Dark Souls yet? Here's 6 reasons why you should give it a go