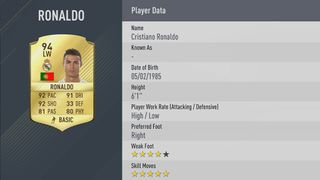 In the wake of Portugal’s Euro 2016 triumph, football’s greatest supervillain has once more achieved something bound to leave his rivals green-eyed: Cristiano Ronaldo is the highest rated player in FIFA 17.

The Real Madrid star goes one better than last year, where he was pipped to top spot by Barcelona and Argentina wizard Lionel Messi. Ronny is scored 92 for pace, 92 for shooting and 91 for dribbling, resulting in an overall rating of 94.

For Messi, the relegation from numero uno isn’t an especially humiliating one - he still ranks as the second best player in virtual football. His best rating is 96 for dribbling, with 90 shooting and 89 pace adding up to a 93 OVR.

Team-mate Neymar comes in third, with 95 dribbling, 91 pace and a 92 OVR. You can see player cards for all three at the official FIFA 17 website.