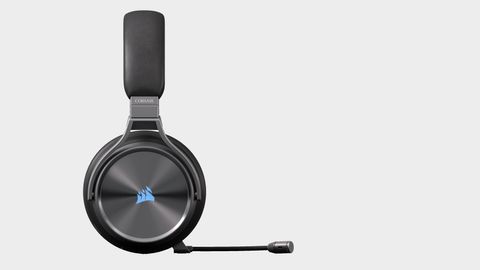 Fantastic, full sound with strong spatial audio detailing and an aesthetic to sit proudly on any PC desk.

It seems Corsair wanted to separate themselves from the gaudy world of gaming headphones with the release of the Corsair Virtuoso RGB Wireless SE (the SE variant is for the gunmetal gray model). Where competitors went big with massive cans, blindingly bright plastics, and enough RBG to light a small village, Corsair has turned up the suave with a set of understated but incredibly powerful gaming cans. What you see is what you get, a sleek gaming headset that focuses on delivering a premium experience with solid performance. With fantastic audio quality and scope, even in the higher ranges that traditional headsets seem to struggle with, and a mic worthy of a far higher price tag, the Corsair Virtuoso’s are out to impress and they do so in unparalleled style.

You’ll certainly be able to get your hours out of these cans. The Virtuoso’s sit exceedingly well on the head, with a stable but malleable resting position snapping the large cups gently to the ear. They’re lightweight enough to withstand long hours of play without feeling top-heavy or constrictive, and the memory foam cushions gently clasp around the ear to ensure both full audio coverage and prevent against painful clipping that can occur after a few hours in lesser sets. While the headband itself could do with the same cushioning treatment, sometimes sitting a little too hard on the crown, it’s certainly easy to relax into such an embrace.

Perhaps more impressive is the sturdy feel of the Virtuoso headset in the face of such a relatively lightweight build. You’re getting an aluminum gunmetal gray casing with a premium grain feel on the side of the cups themselves. It’s a striking compromise between weight and build quality that toes the line between solid feel and comfort perfectly while maintaining a gorgeous aesthetic that doesn’t scream 'teenager'. RGB is rarely subtle, but Corsair has harnessed the cool power of the alluring LEDs and let them loose in small logos on the side of each cup. They’ll largely tell you when your headset is powered on and connected wirelessly, but it’s good to know that even with such a sophisticated set of cans you can still keep the multi-colored dream alive.

Setting up the Virtuoso headset in wireless mode is remarkably simple. Slot the wireless USB dongle into your PS4 or PC, toggle the headset into wireless mode and you’re good to go. It’s a refreshingly painless approach to connecting wireless headsets made even better by the immediate and stable connection. You’ll obviously get better audio from a wired connection, either through the supplied braided 3.5mm AUX cable or the preferred USB cable, but wireless isn’t a gimmick here, it’s a rich experience made even more reliable by Slipstream technology.

A small volume scroll wheel sits on the side of the right cup in a perfectly positioned spot for quick thumb swipes, and while it offers easy volume access in wireless or USB wired mode, it doesn’t seem to offer the same functionality when testing on a mobile device over AUX. It’s worth bearing in mind if you plan on using the Virtuosos as an all-round set, which you wouldn’t be blamed for at this price point.

If you are looking to use the Virtuoso’s as a primary set, opening Corsair’s own software (on PC only) to tinker with EQ and presets offers expanded features designed to turn the headset into a more holistic experience. Creating custom profiles with EQ adjustments suited to music, TV, and specific game genres feels simple and offers a range of tweaks to enhance your audio no matter how you use your cans. Plus, you can, of course, configure your RGB settings.

Once you’ve marveled at the external sophistication, you’ll find the same level of performance running throughout the audio quality and detail of the Virtuoso headset. With a full soundscape pumping through each can and excellent clarity keeping every shot, footstep, and reload right at the forefront of your listening experience, shooters and adventure titles perform exceedingly well on PC. When it comes to testing the 7.1 surround sound offered on PC, however, we started with a heart attack.

Sitting down to a Blair Witch session felt like a nightmare come true, with every creak of the forest perfectly pinpointed and swarming spatial audio maintaining fantastic clarity and direction. Such surround sound doesn’t lose its precision in the face of a fuller soundscape either, with tests in Wolfenstein: The New Colossus and Borderlands 3 offering the immediate location of each enemy shot and every secluded footstep with fantastic dynamism despite a plethora of background noise to contend with.

It would have been fantastic to experience a similar soundscape sophistication on PS4, however, with the 7.1 surround sound option unavailable on the console, the audio detail feels a little less full. Overall, the experience with a PS4 controller in hand fell slightly short of that of PC. While you’re still picking up excellent audio quality in general, with rich sound throughout higher frequencies in particular, it’s a little timid compared to the power of PC use.

Those higher frequencies are impressive, however. With a full range from 20Hz to 40,000Hz on offer, you’re unlikely to find another gaming headset with such focus on this detailing. That does sometimes come at the cost of lower-end frequencies, unfortunately, across both PC and PS4. Sliding out of a particularly badass cutscene in Wolfenstein: The New Colossus, I felt myself wishing there was more impact behind the thumping bass and growling power of the music. While fine for general audio, a larger shot sometimes lost some of its booming force and some of the grittier tracks lacked the oomph of a more bass-heavy set. That’s not necessarily a bad thing, the gaming headset world does seem to be blighted by swathes of bass crackling cans, but it does seem like more attention has been paid to the treble tones here.

Overall - should you buy?

The Corsair Virtuoso RGB Wireless SE gaming headphones are out to make a statement, and they’ve performed exceedingly well. This is a headset with little competition at this price point, offering powerful drivers at the helm of amazing audio quality and surround sound detailing. If you’re after a set of sophisticated headphones with an understated design offering more power under the hood than they let on, you’re in for a real treat. If you’re looking for a PC-first soundscape to provide all-encompassing audio at crystal clear quality, even better. The Virtuoso’s offer fantastic value for money with high-end tech under the hood resulting in an often awe-inspiring experience on PC, while giving it a good go on PS4 as well. If you’re looking console-first, however, you might find more PS4-oriented features on a cheaper set.

If you're looking to compare options, then be sure to check out our guides and price comparison charts on the best PS4 headsets and best PC headsets for gaming.

Corsair Virtuoso review: a headset with sophisticated audio and the looks to match

Fantastic, full sound with strong spatial audio detailing and an aesthetic to sit proudly on any PC desk.