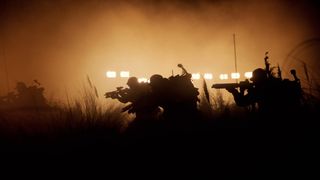 The Alien franchise is known more for ferocious xenomorphs than conspiracy theories and secret codes, but 20th Century Fox has been playing up the latter the past few days. The studio behind the upcoming Alien: Covenant tweeted out this picture of armed personnel yesterday…

… as well as this picture of what appear to be cryosleep pods today.

Notice anything strange about them? Yep, they're both captioned simply with strings of numbers, and fans have been wracking their brains trying to figure out what they mean. Theories abound, but here's a few that make the most sense to us:

The first picture's string of numbers could refer to a date, potentially December 05, 2104. Alien: Covenant takes place in 2104, so this makes sense if we think of the picture as something that exists in-universe. If we think of it as advertising material however, we can see different patterns.

If we look at the string of numbers and separate them by every other pair, we get 22, 12, 21. That could be the 22nd hour of the 12th month of the 21st day (if we organize it American style), or the 22nd day of the 12th month and the 21st hour (if we organize the date European style). It might be nothing, but this could point to when we'll get our first trailer for the film.

Once the second picture was released, fans got to work cracking the code even more furiously. Some on the Alien Facebook page suggest it's a countdown in milliseconds, but that doesn't line up with the times these pictures were posted (if they had, we'd have gone from t-minus 61 hours to t-minus 36 hours in just 18 hours).

Basically, people are still struggling to come up with a singular theory that makes complete sense, but it's got fans talking, and no doubt that's exactly what Fox and director Ridley Scott want.