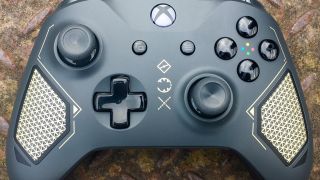 The newest Xbox One controller looks like it fell off of a cyberpunk mercenary and, honestly, I love it. The Recon Tech Special Edition wireless controller for Xbox One is a laser-cut above the usual surface-level cosmetic variants: that gold grid on the front is actually laser-etched into the plastic, and the rear has a texturized rubber grip.

Here are some shots of the controller in real life, via Xbox social marketing manager Graeme Boyd.

The new Xbox Recon Tech controller. Key things here: Laser-etched grips on the front and rubberised grips on the back 👌Out next month. pic.twitter.com/RtCpWjJsSCMarch 21, 2017

What do those symbols in the middle mean? Propeller plane detected, spiky loops ahead, martini olives forbidden? It doesn't matter, I'm too in love with those Deus Ex-as-hell golden triangle grids to care.

The Xbox One Recon Tech Special Edition wireless controller will hit retailers and the Microsoft Store on April 25 in the US and May 4 in the UK. It'll cost $69.99/£59.99, which is $10/£10 more than the standard black or white controllers. If you think about it, that's just $5/£5 per triangle mesh. What. A. Steal.