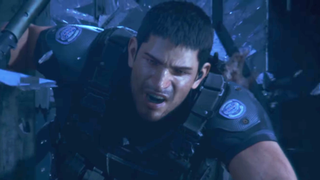 Resident Evil 7 won't feature familiar faces like Leon Kennedy - at least according to his voice actor - but that doesn't mean fans of Raccoon City PD's finest (and most handsome) are getting left out in the cold. Resident Evil: Vendetta is a CG film slated for spring 2017, and it stars Leon alongside other fan favorites like Chris Redfield and Rebecca Chambers. You can get a taste of what's coming below:

The movie is executive produced by Takashi Shimizu, director of both the original Japanese horror film Ju-on and its American counterpart, The Grudge. It's hard to be certain, but it looks like Shimizu and Capcom are taking audiences back to the Spencer Mansion, which was the setting of the first Resident Evil.

Vendetta takes place after Resident Evil 6 and before Resident Evil 7, so it may even help connect the franchise's long-running lore to the new game. That's just speculation though, kind of like how we can only wonder why the people who edited this trailer would use music from the opera Pagliacci and not use its most famous tune. The mysteries just never stop with this series.