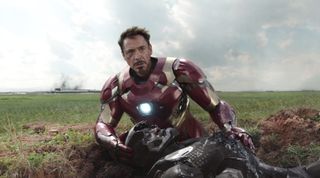 There were a few Marvel fans (myself included) who thought that some heroes would not survive Captain America: Civil War, and for good reason. The comic book version of the story that the film took its inspiration from has multiple casualties, not least of which is Captain America himself. However, while there are serious consequences to the Avengers' actions, all of the major characters are still alive at the end of the movie.

At a recent Q&A for Civil War, a fan questioned Marvel President Kevin Feige and directors Anthony & Joe Russo on the low death toll, and it prompted this exchange (via Hitfix):

Anthony Russo: We never talked about killing Cap in this one, right? no.

Joe Russo: We did for a beat. We talk about everything.

Kevin Feige: Well, the ending was always more about fracturing the team completely before getting into Infinity War.

Joe Russo: We talked about lots of potential characters dying at the end of the movie. And we thought that it would undercut what is really the rich tension of the movie, which is this is Kramer vs Kramer. It’s about a divorce. If somebody dies, it would create empathy, which would change and allow for repair, and we didn’t want to do that.

Kevin Feige: In the amazing comic book story, which certainly the conceit of this movie is based on and some of the specifics — during their big battle, which has a hundred times as many characters, a character dies. And we talked about that for a while. And, ultimately, we thought what happened to Rhodey would be enough of a downer.

The plan to split the Avengers apart instead of outright killing a major character makes sense, and it's deftly accomplished within the film. Indeed, even if Captain America had perished in Civil War it's unlikely that even those who aren't huge Marvel fans would've believed he wouldn't return for Infinity War, and that film would then need to spend a considerable amount of valuable screen time explaining Cap's return.

In any case, while our heroes may have survived this time round I doubt the same will be said about Infinity War. With actors' contracts coming to an end, it's likely that we'll be saying goodbye to a few stalwarts of the Marvel Cinematic Universe. Thankfully, with the likes of Black Panther, Spider-Man, Captain Marvel, Doctor Strange, and more, Marvel will have plenty of heroic stories to tell in Phase 4 and beyond.