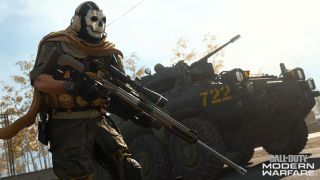 The Call of Duty: Modern Warfare battle royale mode has seemingly suffered yet another leak, this time showing what the menu for the mode may look like and some of its options.

Reddit user ARedWerewolf shared a pair of images that they say were captured after their game glitched out. Both show the Warzone title in the upper left, as corroborated by a recent key art leak, and one even gives us an idea of how players will be able to customize their loadouts heading into a match.

Game glitched and showed me the Warzone menu. Is this the BR?! from r/modernwarfare

The "Weapons" tab of the menu includes sections called "Edit Drop Kits", "Watch Select", and "Armory." Most battle royale games drop you in with no equipment whatsoever, but it sounds like Modern Warfare may let you pick and edit Drop Kits that give you a starting loadout to work with as soon as you hit the ground? That's just speculation based on the name and text in the screenshot, of course.

The other image, uploaded to Imgur, shows the Play menu which - at least in this leaked, glitched state - only has a single entry for "Training". As ubiquitous as battle royale modes have become in recent years, it couldn't hurt to give players a refresher course as they get ready to drop in, especially if Warzone makes more changes to the usual format beyond Drop Kits.

Meanwhile, Infinity Ward hasn't officially confirmed that battle royale is coming to - though it did heavily imply it in a new in-game cinematic for Call of Duty: Modern Warfare season 2. On top of that, there's a new "Classified" game mode just chilling in the main menu for the game right now, so it looks like a new announcement of some kind is probably coming sooner rather than later.

See what else you could be playing soon in our guide to the best upcoming games of 2020 and beyond.