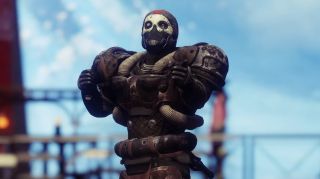 Destiny 2 Armor 2.0 was the focus of Bungie's recent reveal stream, but the studio also shared a few other tantalizing tidbits coming in Destiny 2 Shadowkeep. We saw several ability changes in action, for one, not to mention one of the oldest and most-requested quality of life changes of all time: a higher Glimmer cap. The new cap is 250,000. Huzzah!

Bungie showed off some new tricks for Void Titans and Hunters which should make them more relevant in PvE. Bottom-tree Nightstalker Hunters, for instance, can now apply the Heart of the Pack buff using smoke grenades. This buff grants increased weapon handling as well as a boost to Mobility, Resilience, and Recovery. The smoke grenade itself also makes allies invisible, and buffing allies in this way refunds grenade energy. Coupled with the buff to Shadowshot's Quiver damage, this ought to flesh out Nightstalker's kit. The question is, will Quiver shots actually kill in Crucible now?

As cool as that is, Titan was the star of the show. Its long-neglected Ward of Dawn Super, better known as the Titan bubble, is getting the buff that Titan mains have been hoping for since Destiny 2 launched: Weapons of Light is back. Whenever top-tree Sentinel Titans place down a bubble, allies inside will receive a significant damage buff which persists outside of the bubble for 15 seconds. This could represent a return to the good-old days of hopping in and out of bubbles to keep Weapons of Light active while avoiding incoming fire. This strategy put in work in the original Destiny, and it'll probably be just as effective now.

Luke Smith recently hinted that Warlocks, particularly their Well of Radiance Super, will receive heavy nerfs going into Shadowkeep, so there are definitely more class changes to be seen. It's possible that Titans, with their new damage-boosting bubble, will step up to fill the role of Well of Radiance as a support Super. In any case, as overpowered as Well of Radiance already is, there's no way Bungie would bring back Weapons of Light without making broader changes to encounter and class balance. We should hear more about those balance changes this week.

Destiny 2's Pursuits tab is getting a facelift - check out the revamped version.