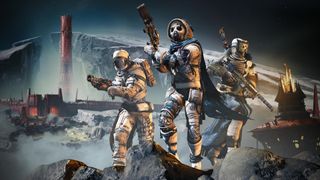 Destiny 2 Armor 2.0 is shaping up to be the single biggest change to player customization in Destiny 2 Shadowkeep. Among other things, it will double the amount of stats on armor, enable players to add up to three mods of their choosing to each armor piece, and tailor their appearance using a selection of universal armor ornaments. Bungie finally tore the veil off the armor system in a recent livestream, so we've rounded up everything on Destiny 2 Armor 2.0 here.

The basics of Armor 2.0 are fairly simple: every piece of armor has an energy pool and applying mods uses some of that energy. All 2.0 armor has three mod slots: one general slot for neutral things like stat boosting mods or Minor Resistance, and then two slots for weapon- or ability-specific mods. If you have five energy, you could use two one-cost mods and a three-cost mod. If you have 10 energy, you could use two five-cost mods and leave your third slot blank. Judging from what we saw, armor usually rolls with three to five energy and can be upgraded to a maximum of 10 energy. Maxing out an armor's level will also boost all of its stats by two.

The biggest difference between the current mod system and Armor 2.0 is that mods are no longer consumed when applied. Once you unlock a mod, you can apply and reapply it to any of your armor as much as you want. From what we saw, it's fairly cheap to swap mods in and out - in the range of 500 Glimmer - so experimenting with different mods should be a lot easier.

"If you’re a pretty hardcore player (or really lucky!) and have a set of armor today with perfect-for-you perks (like a fully loaded Enhanced Gun You Like set of perks), I think you’re going to keep using them for a while. I certainly expect the World First raid teams are going to go in with Forsaken-era gear that they’ve infused up throughout their Shadowkeep Power progression.

"As the weeks go by and players approach the Shadowkeep Power cap and start finding mods with enhanced perks, we think that’s when our most invested, progression-chasing players will start to move over. Players can totally mix and match between new armor and the armor they have today as well."

How do I get more mods?

Once Armor 2.0 is out, mods will be available from several sources. The Gunsmith will still sell a rotating selection of mods which you can purchase using mod components. Likewise, you'll receive mods from Gunsmith packages, so start stockpiling weapon parts for those trade-ins. Mods will also drop from world engrams, as well as activities like raids, Iron Banner, and potentially Strikes and dungeons. Bungie didn't nail down exactly which mods will come from where, but it sounds like general mods will drop everywhere while specific activities will yield unique mods, not unlike the raid-exclusive mods available now. Additionally, Enhanced mods will only drop from pinnacle end-game activities.

Will old mods carry over into Armor 2.0?

Old mods will not disappear in Shadowkeep, but they will not work with 2.0 armor. You'll still be able to use them on your 1.0 stuff, but you won't be able to bring them forward. You'll have to unlock new mods by getting them from the sources outlined above. So instead of using an old Super mod, you'd need to unlock and apply a new Intellect mod to get the same effect.

You will at least be able to disable old mods for mod components which you can then use to purchase compatible mods at the Gunsmith. We don't know how many components you'll get for each mod - hopefully more than one.

Can I use my current armor after Shadowkeep is out?

Existing armor will be perfectly usable even after Armor 2.0 drops. However, it won't have the new stats - Intellect, Discipline, and Strength - nor will have it access to the three mod slots that 2.0 armor does. The good news is that you should be able to build stronger and better-looking versions of your current favorite armor relatively quickly. Armor 2.0 is going to hit the reset button to some extent, but it sounds like the new stuff will be worth throwing out the old stuff.

Additionally, 2.0 versions of Exotic armor will be purchasable from your Collections page once Shadowkeep drops. You may need to get one to drop out in the wild to get the role you want, but you will have access to updated Exotics on day one.

You can get a headstart on Armor 2.0 using our Destiny 2 Solstice of Heroes 2019 armor guide. This year's Solstice armor set will be turned into a 750-Power Armor 2.0 set when Shadowkeep launches, making it the perfect starter build.

Bungie confirmed that all existing armor, from planetary sets to raid sets, will start dropping as 2.0 armor once Shadowkeep is live. You'll need to reacquire the pieces, but since you can mod them yourself, you won't have to grind out more god roll armor. In theory, you can make your own god rolls now. There's still an element of randomness - different stat rolls and energy types, mainly - but the average armor quality should go up dramatically.

Oh, and Bungie community manager DMG04 confirmed that Year One Vanguard and Crucible armor will be available in 2.0 form with their respective ornaments. Huzzah.

How about those ornaments?

Armor 2.0 is pretty fashion-focused overall, and the addition of universal ornaments is one of its key pillars. All of the Eververse armor you've collected will be available as universal ornaments on all of your armor. You can apply these as just as you would shaders or ornaments via the new cosmetics tab of the armor preview screen. Just select your armor piece, select the ornament you want, and apply it.

Rather than elemental defenses, armor pieces have elemental energy types in Armor 2.0, and they seem to affect which mods you can apply. Basically, different energy types support different weapon mods. Exotic and Legendary armor both roll with random energy types, and there doesn't seem to be a way to change this after the fact. Here's what we know about energy compatibility:

This energy system will invariably shape and/or limit certain loadouts, but Smith says mods may be changed in the future. "We could tune their effect (how much speed does the reload effect add?)," he said, "we could tune their cost (how expensive is this mod to socket?), we could add mods to the pool for a different affinity." So if your dream combo doesn't look possible now, know that there's still hope. In any case, Armor 2.0 will always be less limiting than the current system.

On top of Mobility, Resilience, and Recovery - which still do the same things - Armor 2.0 will roll with Intellect, Discipline, and Strength. These were the armor stats in the original Destiny, and they have the same effects in Destiny 2:

New armor not only has more stats, it also has more detailed stats. Currently, Mobility, Resilience, and Recovery have a range of zero to 10. In Armor 2.0, that range will be zero to 100. There are also tiers of effectiveness within that range; every 10 points dramatically improves the potency of that stat. So it's kind of like we still have 10 tiers for each stat, but now each armor piece contributes more stat points. Plus you can apply mods to boost any of these six stats. Here's hoping Super recharge rates don't fly out of control.

As Smith explained, the current recharge rates are normalized to Intellect, Discipline, and Strength values of 30. In other words, you'll need to 30 points in each stat to maintain your current default recharge rates. However, by wearing armor with the rolls you want and adding mods to it, you can increase the stats you value most. And Smith says "it is totally possible to put together a +100 intellect build (100 is the cap) without socketing a single mod."

Which mods go where?

We haven't seen all of the mods available, but here's a rough look at how they shake out based on what we know:

All the new armor mods

We haven't actually seen that many new armor mods just yet. Bungie's reveal stream focused on existing mods, but it also teased new mods to come. You can find more info about previous mod teases here, and a list of the confirmed new mods below:

Ammo Finders: now specific to each weapon type. Bungie says they're more effective than generic mods like Heavy Ammo Finder, and ammo bricks generated by an Ammo Finder mod will glow on the ground to show you that the mod's working.

To upgrade all this new armor, you'll need two new materials: Enhancement Prisms and Ascendant Shards. These were only briefly teased on-stream, and Bungie didn't explain where they come from, so we don't have much to go on at this point. We do know Enhancement Cores and Enhancement Prisms are not the same thing - no, they aren't being renamed again - but they may drop from the same sources. Notably, Ascendant Shards are an Exotic-grade material, so you can bet they'll be harder to come by.

Can I still Infuse my armor up?

Yep! Upgrading your armor's energy is a separate process from Infusion. You can still dump higher-level gear into your favorite stuff to keep it with you. This also goes for weapons, and nearest we can tell, this includes dumping Armor 2.0 gear into Armor 1.0 gear, just in case you really want to hold onto that old helmet.

Armor 2.0 will be shaped by the Power changes coming in Shadowkeep. Here's everything you need to know about them.